Windows XP Media Centre Edition, Microsoft's latest version of their popular operating system provides full personal video recorder facilities. Used in conjunction with a Microsoft remote control a television or computer screen can be transformed to record television for you.

A new large and simple menu system gives you access to DVDs, CDs, MP3 music and all the usual functions of Microsoft Windows. With two Freeview cards installed it matches any other device for personal video functions. 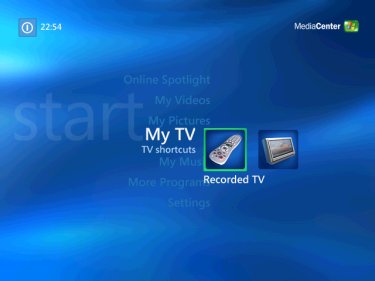 This is far the best option for those with a plasma or LCD television for the picture quality, and Dolby digital sound is supported. To function it will need to have an internet connection to connect to download the programme guide.

When connected to a network, all recorded programmes are shared. This allows programmes to be watched on other computers or an X-Box, or copied to a portable device or laptop for watching elsewhere. 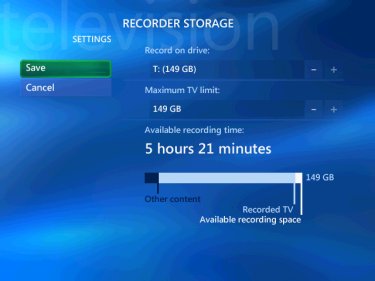 The most sophisticated series record facility has an elephants memory and will record programmes when they appear on other channels or at other times. It can deal with recording clashes intelligently, and will pick up new series automatically.

However you cannot currently listen to digital radio stations on Freeview, and there are no plans to support the interactive services such as BBCi. As it is based around standard PC, if you want to add more hard drive space later (or other hardware, perhaps a DVD writer) this is both possible and inexpensive.