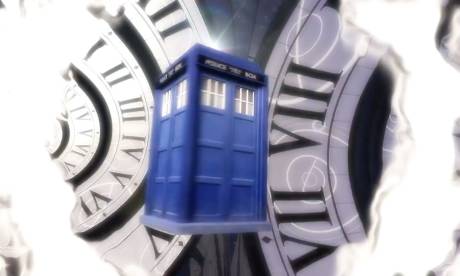 Photograph:
published on UK Free TV
‘It’s, er, really quite fun in its way,’ [Reg] concluded. ‘Certainly better than television and a great deal easier to use than a video recorder. If I miss a programme I just pop back in time and watch it. I’m hopeless fiddling with all those buttons.’ - Douglas Adams, 1987, "Dirk Gently's Holistic Detective Agency"

It is a little confusing.    The range of features between products is quite similar, however there is a big implementation difference between them that can make a lot of difference when using them.

This idea first appeared on YouView.  You can see the idea here 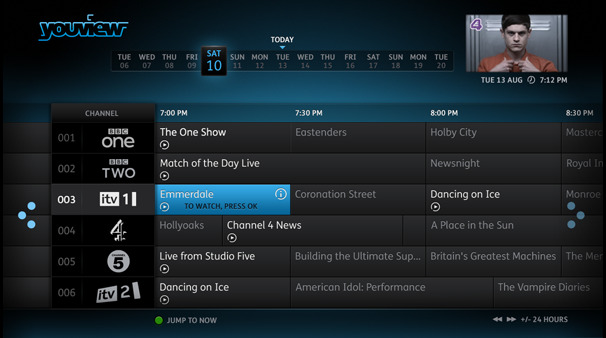 By using the left and right arrows it is possible to move backwards in time over the last seven days to find programmes you can watch on BBC iPlayer, All4, ITV Player and Demand 5.   This is in addition to seeing the shows you have recorded on the device yourself.

Freesat's Freetime has a similar idea, by pressing the left arrow from the Now/Next screen, you can see all the shows from a previous day that can be watched online. 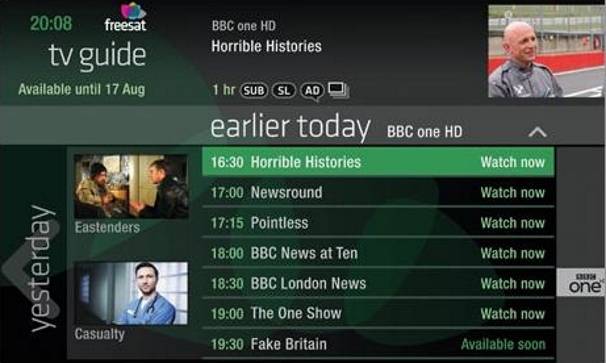 Other days can be reached by pressing left again.   This approach makes it easier on channels where less of the content can be viewed and is more attractive with the use pictured highlights. 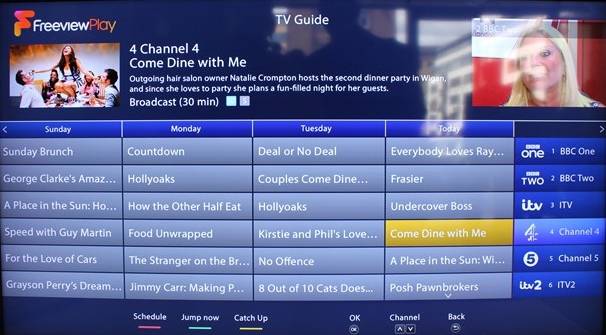 This seems confusing, given that the screen lines up programme names with channels that they are not on.

Which product have on-demand TV?

All Freeview Play equipment CAN use internet-delivered content.   However, some other Freeview bands can.   Some Freeview HD, Freeview Recorder and Freeview HD Recorder can too.  Only "classic" Freeview boxes and TVs can't go online.

Which products have Apps?

Freesat Freetime has a rather excellent (and free, of course) Android and iOS app that allows you to view the EPG, control the playback on the TV, set recordings and view what is recorded on your set-top box. 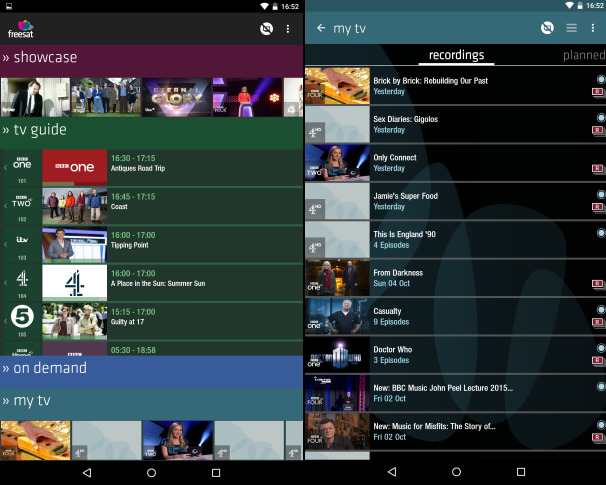 So, which should I choose?

If you have an existing TV and access to a satellite dish or connection (as you may having a modern flay) then without doubt, go for Freesat HD with Freetime.   You have more channels, an easier to use EPG.

If you don't have a dish, but you are being offered a YouVIew box under a deal from BT or TalkTalk, this is a workable system "for free".    This is also a good way to get a selection of extra channels for a lower subscription price.

At the moment, only very expensive (£3200, Panasonic 65" at John Lewis) television sets have Freeview Play.   However, in the longer term, Freeview Play will come built into all TV sets and will provide a backwards EPG for all.   Hopefully later revisions will sort out the obvious usability issues.


Help with Outside the UK?
[][][
In this section
Comments
M
MikeB
sentiment_very_satisfiedPlatinum
8:40 PM
Macclesfield
Apparently all the 2015 OS Panasonics have working Freeview Play (at least the Panasonic rep says so..). However, if your buying a TV, I suspect this should not be a big deal, no matter what the system (or just using apps). Sony has Youview, Humax has both(?), Panasonic had Freetime last year, and now Freeview Play, and gSamsung/LG use apps. In the case of Samsung, having switched over to a new OS, called Tizen, not all the apps work yet. And LG currently only has Iplayer and C5. Sony Blu rays etc from 2010-11 will no longer support C5, etc.

In other words, dont buy a TV based on what smartness it has now, at least within reason. Is it the right size, does it have a good picture, does it have the best number of connections and is it attractive, reliable and easy to use? Those are the most important questions. After that, there are lots of boxes that will attach to your TV, which you probably have anyway. If its an Android OS system (which is likely), then you should be able to use an Android smartphone, and there is always Chromecast, Ruku, Apple TV, etc. My Now TV box (which cost a whole £12) gets all 4 channels on demand, so there are plenty of choices out there.

I can confirm that at least the Panasonic CX802B series have had the update for Freeview Play and is very clear and works very well. If you have added a USB hard drive (can be a USB powered for 2.5 inch), you can select to record from the guide. Going back up to 7 days, the iPlayers also work well.

I hope this helps.

We have found that the Roku Box has enabled us to add to our choice of viewing without having to invest in a new TV when our current Freeview model is working well.

Further to my previous post on the Panasonic CX802B, at the moment, you cannot pause Live TV even if the external USB Hard Drive is installed. This is a big minus point.

Also on the Panasonic Freesat Freetime implementation, you cannot directly record from the Guide as you can on Freeview Play; another minus point spoiling what is, apart from the lack of Live TV pause, a great set.

Again, I hope this helps.

DaveCheltenham's 35 posts
DaveCheltenham's: mapD's Freeview map terrainD's terrain plot wavesD's frequency data wifiD's R&TI Service businessD's digitaluk trade radioD's DAB coverage
C
Chris.SE
sentiment_very_satisfiedPlatinum
2:02 AM
The current NOW TV box has BBC iPlayer, ITV Hub, All4 & Demand5 and a small selection of others from the ROKU store - not as many as a ROKU box but for 15 it was a good investment. You can connect to your router by eethernet or wireless with this latest box which will also do 1080p if your set can do that.

Chris.SE's 3,284 posts
M
MikeB
sentiment_very_satisfiedPlatinum
9:40 AM
Chris.SE: I've got the older Now TV box, and you can't knock it for value (nice to know the new one does 1080), but the full Roku does give a lot more.

I saw the Roku Stick for 35 not long ago at sainsburys - although it seems to be currently about 40.