The current regulatory body for the nation's premier public service broadcaster has agreed to make BBC Three and online only service, but has rejected plans for BBC One+1 to replace it. 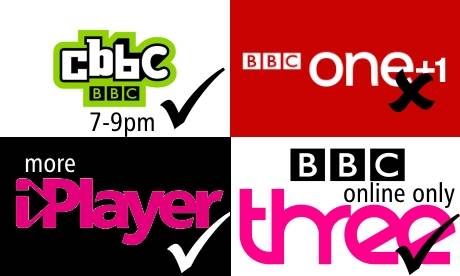 The long-term future of broadcasting is online delivery

Let's start with a quote

"The long-term future of broadcasting is online delivery and the BBC needs to find innovative ways to support the audience move in that direction. The transition will be quicker for younger viewers who already watch less broadcast television, watch more online and use new digital services in different ways."

It seems that the BBC has noticed that young people today don't really watch the TV that much, they prefer to used interactive peer-to-peer devices to do what they want when they want.

To this end, the BBC think that BBC's 18-30 channel will work well online, but are concerned that the transition needs to me managed better.

But at the same time, the BBC channel for younger people still, CBBC needs longer broadcast hours, until 9pm.   Not sure how that fits with the "transition will be quicker for younger viewers".

The plan was to use the EPG slot 7 vacated by BBC 3 for a standard definition hour-later channel for BBC One.    This was going to be on multiplex B, which means it would only be visible to homes with Freeview HD equipment, which is only about 75% at the moment.

The Trust has approved the idea that the BBC iPlayer will be able to carry content that hasn't first been broadcast.   This had to be done to allow the third BBC TV channel to continue online.

Want to read the report in full?


All questions
[][][
In this section
Comments
Briantist
sentiment_very_satisfiedOwner
1:06 PM
The first place you saw BBC Three was 22 May19 June 1971 ... The D?mons - Wikipedia, the free encyclopedia

Briantist's 38,844 posts
D
Deehcee
4:22 PM
Absolutely ridiculous, Although I have internet, I will NOT SWITCH ON p.c. just to watch bbc3 online, and what about the thousands of others who do not have, or want to have a so called Smart TV? Another decision taken by so called "experts" who don't live in the real world. Are they trying to push all of us over to sky and/or BT. Also how much will this all cost, particularly as the Beeb have just lost the rights to the Olympics to Eurosport, who paid £900M. If the Beeb has to run by overpaid "amateurs", this should be investigated and replaced with professional business people with a proven track record in the Entertainment business. The bbc has just announced over 1,000 job losses, I suggest that the trust should be the first to go !
Deehcee