Capture the flag: the very British problem for the BBC

What follows is not an attack on the BBC and I would be very disappointed if anyone took it that way. 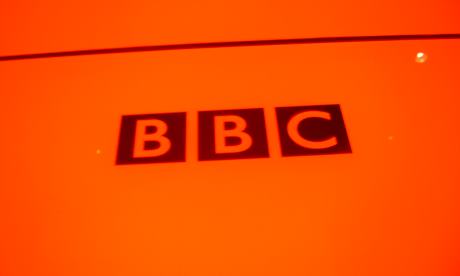 The BBC, unlike anything else in the country, actually touches the minds (and pockets) of every single home in the country.  Monthly "reach" figures show the BBC genuinely finds its way into 99.9% of homes.

The funding method - an annual fee collected from all homes with a television – sets it aside from all other commercial and state services.  Even the small number of pensioner homes that now have the state paying for them, consume BBC television and radio service.  BBC iPlayer and radio services are still there for the small percentage with no television in their home.

The problem for the BBC in the coming years comes from the growing disparity between the people who pay for and trust it, and the realities of the UK unwritten constitution.

The following graphic, I hope, illustrates the problem for the BBC's continued existence. 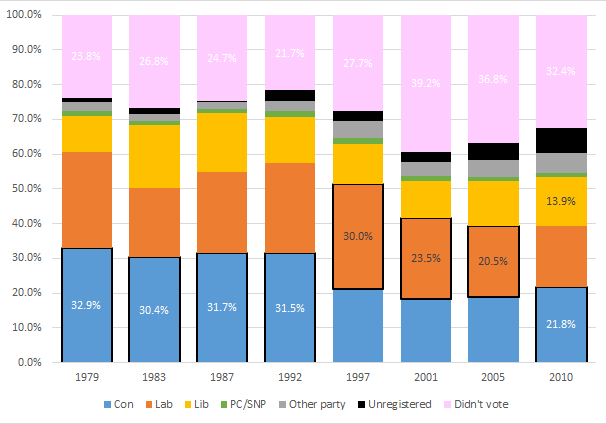 This shows the results of the UK general elections over the last 35 years.  In all of them I have highlighted the winning party and shown the percentage of those of voting age who marked their ballot that way.

I think that I am correct to use the term "capture the flag" to describe British democracy.   Because we don't vote for the executive, we use a special system that hands all the power to a single individual because they were able to get a majority of seats in the legislature vote.

Once appointed Prime Minister, for five years you have the power to appoint, including those people who are supposed to check your power.

Other have checks and balances

Let look outside the UK for a moment at the USA.    In their system the government is divided into three clear parts.    The president, the house and the senate.    For any new law to be passed, all three of these have to agree in every detail about it.

The president is elected by a nationwide popular vote, the House of Representatives in a system similar to our MPs, and the senate on a two-seats-per-state basis. 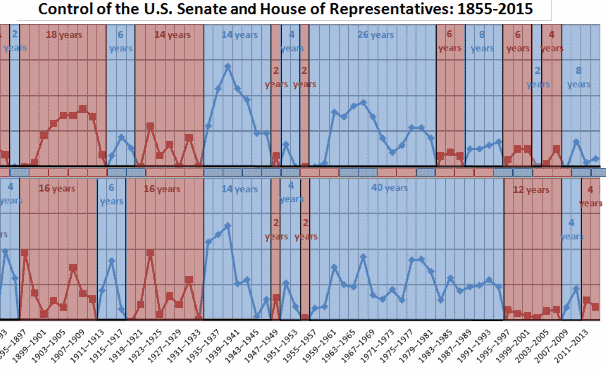 This often provides different views of will of the people: it is quite normal for their system to deliver different majorities.

Sometimes it is interesting to look back at the most ancient forms of democracy.   Critics will point to the obvious flaws of slavery and Patriarchy.     But all successful forms of representative government have these checks and balances.  Our ancient Greek and Roman predecessors were very much aware of "the tyranny of the majority" and the question of "who watches the watchers?"

The BBC is supposed to have a special status, a Royal Charter, to provide a bulwark against those in power.

I think it is disingenuous to suggest that the BBC has corporally bought into the idea that there are "only two opinions" but it does seem to me that the biggest threat to the continued existence of the BBC is to follow around a political leader voted for by one in five people and treating him as a the boss.

But it is this gaping gap – between the "rule by tyrant" and the will of the people – that stands to cause a real BBC crisis (rather than the faux ones created by newspapers) at some point.

Is it going to be the case that, in the end, realpolitik says that power will "follow the money" and the BBC will be privatized and become just another self-serving provider of services to the rich and powerful?

I think that if I asked then I would give the BBC the benefit of the doubt.  It does try very hard to craft programmes that will appeal both to everyone and for those with tastes outside the mainstream.

It has always had to battle hard with the problem of being popular while not being populist.    There are notable points in the broadcaster's history (World War II, the 1960 Cultural Revolution, 1970s Punk) where it did spot the wind changing. 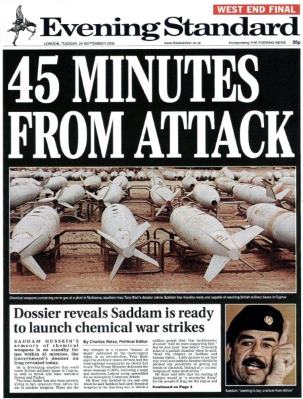 And then there are times when it didn't, giving when the Hutton whitewash came out, and DG Thompson car-crash settlement with PM Cameron.

Let me finish with a quote, from Upton Sinclair

"It is difficult to get a man to understand something, when his salary depends on his not understanding it"


All questions
[][][
In this section
Comments
R
rob
sentiment_satisfiedSilver
10:18 AM
very nicely done Brian and those graphs are very interesting too... keep up the good work pal

I don't see the link between the continued existence of the BBC and the spread of votes in our 1st past the post electoral system or am I missing the point?

While true to say that the Prime Minister is not elected directly the way that an American president is it is also obvious that he or she must continue to enjoy the confidence of MPs in the government that were elected. Not ideal but it seems to work.

The BBC may well be far from perfect but the way that it is funded enables it to produce programmes of a quality which force the commercial channels to keep standards up in order to retain a reasonable proportion of viewers. Again not ideal but it too seems to work.

Neil Bell's 106 posts
M
MikeB
sentiment_very_satisfiedPlatinum
2:29 PM
Brianist: An interesting point, although perhaps its easier to think of it this way - if you dont bother to vote, its difficult to say what you want. If you dont say, those that do vote tend to have a larger voice. As President Bartlett said in one episode of the West Wing, most of politics is simply showing up.

In a world where the Overton Window has certainly been moved to the right, and the idea that the free market is infalliable is large unquestioned, thats dangerous for not only the BBC, but also its coverage.

The BBC certainly admits to following the news agenda of the Daily Mail, in terms of what it and other papers think is important at any particular time. And BBC coverage of economics, climate change and many other area's is either bland, employs false balance, or simply follows received wisdom and allows lots of screen time to 'Very Serious People' (Paul Krugman's phrase).

The strange thing is that the BBC is vastly more popular, and certainly more trusted, than any of the politicans that appear on it. If there was a BBC/NHS party, I suspect most people would think about voting for it. The BBC is something we all generally like, no matter our occassional gripes. The pols know we trust it, and so fear it, hence the constant battles with it, even from those who approve of the BBC as a public service.

Even the ideologues have problems - they approve of bits of it, but cannot accept that a) it has to appeal to lots of people, not just them, and b) If they downsize, cut or priavtize it, they will kill the things that they love about it. Its difficult to make someone understand something, when they have a massive chunk of cognative dissonence!

Politician's might want to directly control the BBC, but of course are mindful that if they lose an election, then their opponents will too...

The US electorate and its relationship with PSB broadcasting is a bit different. For a start, PBS/NPR is a relatively small player, and very little funding is at a federal level (although that didn't stop the GOP from trying to defund it as some sort of political theatre). However, its clear that political interference, or at least the threat, means that NPR's political coverage is full of inside the Beltway, conventional wisdom, and is as bland as they come.

As for voting, the recent mid terms were horrible for the Democrats. However, most seats were in GOP friendly areas, in a non election year. The turnout was 38% - so think of it more as a bylection, rather than a mandate. Low turnout and general lack of interest is not just a UK thing.

Neil - I totally agree with your final paragraph - it keeps the rest of them honest. And hopefully an MP or too as well!

MikeB's 2,579 posts
C
CLIVE JOHNSON
8:08 PM
A very good article. Bits of it I didn't quite follow. The BBC is certainly in danger from those who don't like its approach, even when this is very unbiased, and from those who have a vested interest in suppressing it.

CLIVE JOHNSON's 18 posts
J
John Ogden
2:51 PM
Lichfield
I wholeheartily support the licence fee and would hate to see the bbc commercialised. however they are always complaining they never have enough money to continue making quality programmes but there is always money there to send celebs on worldwide jaunts on some lame excuse for a show. bbc you need to look at yourself and spend more wisely or you risk giving your opponents more ammunition .

John Ogden's 3 posts
M
MikeB
sentiment_very_satisfiedPlatinum
6:03 PM
John Ogden: Are you perhaps buying into the meme that the BBC spends lots of money on 'celebs going on holiday'? Or is it that they are spending money on programmes you just dont like?

If your refering to 'Top Gear', then I have to admit that I hate it and everything it stands for. However, there are three things to consider:

1) Its a popular programme, so a decent budget is justified.

3) Thanks to its international popularity, both the programmes themselves and the format are widely sold. Add to that merchandising, and the programme is highly profitable for the BBC. So rather than costing licence fee payers money, it makes money.

Strangely, ITV never gets any flak for sending 'celeb's' to Australia for IACGMOOH - even though it must be costing them a fair amount, for a programme which is certainly could be described as 'a lame excuse for a show'.

MikeB's 2,579 posts
M
Michael
sentiment_satisfiedBronze
9:06 PM
There is not a single journalist, presenter etc on the BBC or any channel who does not proclaim that we live in a democracy. If you ask people What is democracy? you are most likely to be told 'Govt of the people by the people' (usually without the superfluous rhetorical third 'for the people'). But no honest person could claim that a majority of the people/electorate (at least outside the World Wars) can reasonably be supposed to have agreed - and certainly not to have been given the chance to - to all (or even the major) manifesto commitments, far less the decisions that supplanted them: so where precisely do they see democracy in that?
MPs were supposed to hold the govt to account but now their main aim is, not to promote the interests, still less the will, of their constituents, but to support their Party (whose members are a very small proportion of the electorate) in order to gain office themselves, and the BBC dare not really antagonize them, so long as they determine the fortunes of this once highly respected channel for free speech.