The best of times for the BBC?

As part of the ongoing democratic process, the BBC founding Royal Charter is renewed for another decade. With the proliferation of other media, does this mean that the BBC needs to change? 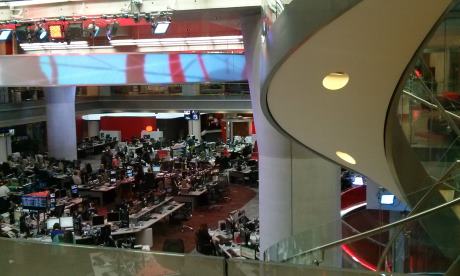 BBC News, at the heart of the New Broadcasting House Photograph: Brian Butterworth

Earlier in the year, I wrote up some thought-experiments of what the BBC might look like in the future.  In that I looked at the possibilities of different funding methods and how that might change the services that are offered.

Of course there are those in our society who have a vested interest in making changes.  Some people oppose the long-standing requirements for broadcasters to be fair and impartial, and would like to have the TV and radio stations news programmes take political sides, as they do in the USA.

Others believe that they would be richer if the BBC was changed.  For some the removal of a statutory annual levy for ownership of a TV set is a burden.  Yet others want the fee to stay but the money raised to be sent to other broadcasters or diverted to the profits of production companies.

Some people are persuaded that, whilst the many benefits of civic society and having a state, collectively owned broadcasters somehow damage personal freedoms.

And critics - jealously - suggest that the BBC should not employ talented graduates.

I'm going to stay away from these arguments for the moment, as they are, despite their volume, somewhat peripheral.

The best of times?

I have updated the graph I created some years ago that shows the TV License Fee costs since 1946.  I have changed the graph to show prices adjusted to 2014 values. 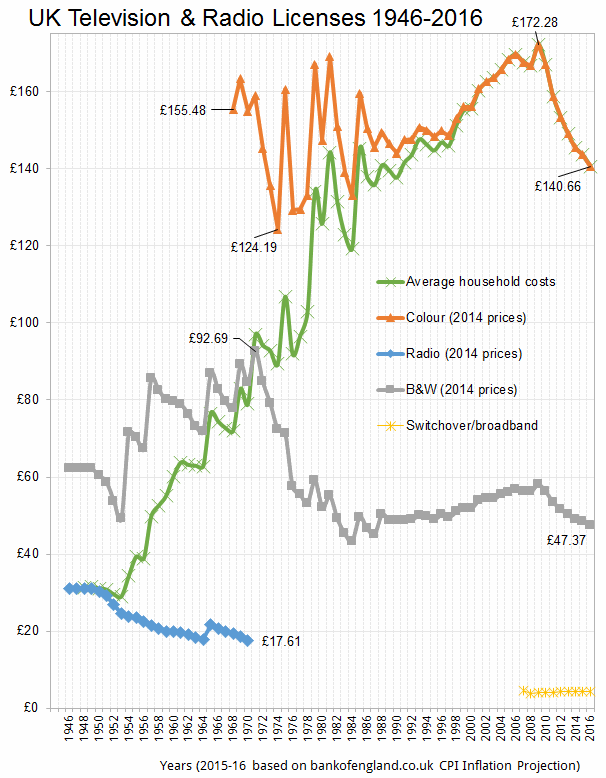 This 20% cut[1] has made BBC Two daytime a repeats service, reduced BBC Three and BBC Four to  empty shells, killed off local radio evenings, cut overnight niche radio programmes and well as trimmed BBC One entertainment.  This is in addition from cuts to Radio 3 drama and live music, and taken a third off the Asian Network.   BBC regions are cut back to their news core and the red button service merely decimated.

On the other hand, the BBC News website – compared to the BBC Ceefax service of 1984 – is spectacular.

In the next part, I will look at the problems and challenges the BBC faces today.


All questions
[][][
In this section
Comments
craa22uk
12:19 PM
hi, can you give us a note on the switchover/broadband line?

craa22uk's 2 posts
Briantist
sentiment_very_satisfiedOwner
1:12 PM
craa22uk: It's the amount of each TV LIcence that was divered from the BBC for "pet projects".

In the first case this was "digital switchover",[1] but since that was done the same amount of money funds "fast rural broadband systems" - see BBC licence fee held at 145.50 until 2016

Briantist's 38,844 posts
D
Dave Hagen
3:41 PM
Hi Briantist, I t still rankles me the stories of waste within the B.B.C. such as the enormous payoffs & the jollies they have. If the likes of this money was spent on the services you have mentioned the hard working licence fee payer may not have as much gripe with the broadcaster.

Is there actually 'enormous waste within the BBC'? or is that the anecdote laden coverage by certain parts of the press? Its without doubt that payoffs to senior management were unnecessary and unwide, but they were a tiny proportion of overall spending.

Perhaps if we were looking at waste, we could start with Local TV. Jeremy Hunt's bright idea was seen as a non-hoper by the industry from the start, yet licence fee payers have stumped up millions in startup and running costs Financial Times | Error | Akamai Error

These are supposed to be commercial operations, yet they have been total failures in terms of both viewing figures and advertising. Likewise, why is the licence fee payer shelling out for rural broadband? And what about S4C?

Brianist deliberately headlined one of the paragraph's in the above article 'avoiding hostility', and perhaps we should look at the actual data, rather than simply projecting what certain parts of the media say?

MikeB's 2,579 posts
D
Dave Hagen
9:44 AM
MikeB: Totally agree Mike, and I would not put Briantist down at all as he does a great job with this website alone. I would still think there is a lot of waste within a very large organisation where they seem to have managers to manage managers, I do agree with your comments on local t.v. Made in Tyne & Wear has just started broadcasting here in the northeast & although it is early days it looks totally worse than amateurish.

Dave Hagen's 19 posts
M
MikeB
sentiment_very_satisfiedPlatinum
1:56 PM
Dave Hagen: Certain parts of the media talk about management wate at the BBC, but is there any emperical evidence?
The BBC is a very large complex organisation, and so there will be some waste, as in any other organisation (even the best run will not be perfect, and I'm sure whoever we work for has some flaws).

However, I'd like to see some actual data of the costs of administration, etc, compared with other parts of the industry and other broadcasters overseas. In other words, I'd like to see some actual data, rather than the BBC being singled out because there is a Parliamentry Commitee which produces a report every so often, which is something that ITV and Sky dont have to face.

MikeB's 2,579 posts
M
Mike Davison
sentiment_satisfiedSilver
9:25 AM
rob: If you read the small print on the countries who have 'scrapped' the TV licence, you find it has been loaded onto other services like electricity bills or telephone charges or more unfairly DIRECTLY onto income taxes. There is no true escape from it. Even advertising has to be paid for somehow. Do you actuially believe those campaigns cost you nothing? In the early days of ITV's existance with only one channel a statistic came out saying INDIRECTLY you were paying £6 per year when the TV licence that funded the BBC TV and RADIO was only £4 per year and the government was taking £1 of that. by imposing that duty on the licence that was originally £3. We now have the farcical situation(in my opinion) that you are paying for the privelege of seeing a commercial channel called SKY. Sky customers should insist on commercial free services but then they would have to pay a realisticly high subscription for their service. The licence is the least worst way of paying for quality services, again in my opinion.