BBC Productions: will it be Arqiva mark two in 2017?

BBC Director General Tony Hall has finally made his mark on the future of the BBC. If Greg Dyke launched Freeview, Mark Thompson takes credit for the iPlayer, how will the Tony Hall plan fare for Auntie? 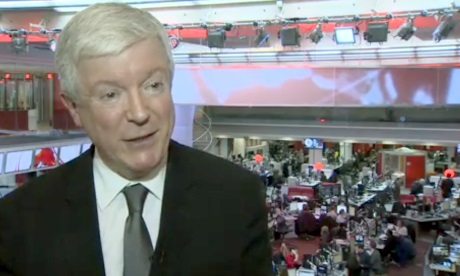 The much covered announcement [1] was to say that in the future, the BBC would stop using a virtual market system to provide competition between in-house programme makers and those outside.

This would be implemented mainly for TV first, and would be considered soon for radio and online. Newsgathering was excluded from the proposals.

There has already been much comment written about the joy of the independent sector and a few rather moot (and silly) comments from Channel 4.

So, I will look at the most obvious parallel to this for the broadcaster known as Auntie.

Back on 28th February 1997, BBC Transmission became Castle Transmission International (CTI) as a result of privatisation. This raised £244 million "to help fund its plans for the digital age" [3]. This is £388m at 2014 prices. 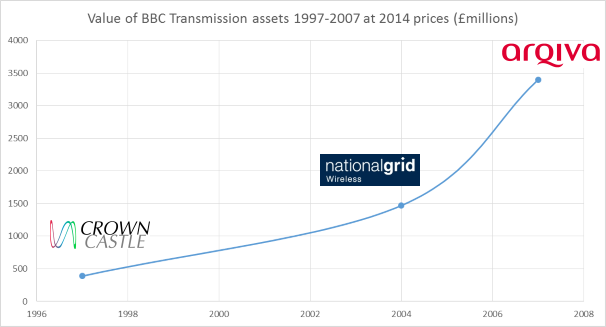 So, the big question for Tony Hall has to be: how much is BBC Productions to be sold off for in 2017?

Because you can not help noticing that the BBC now spends £222m a year on distribution. Which is ironic, because that is, in cash terms, what it got from privatizing BBC Transmission back in 1997.

The joy of the TV and radio production industry suggests that the upcoming sale of BBC Productions to market will result in a freeze of the TV Licence in the short term, and the long-term transfer of value away from the BBC.

A cynical person might also wish to look at the immediate loss of "a billion pounds" when Royal Mail plc was created. [5]


All questions
[][][
In this section
Comments
F
Friedon Miltman
6:17 PM
"Because you can not help noticing that the BBC now spends £222m a year on distribution. Which is ironic, because that is, in cash terms, what it got from privatizing BBC Transmission back in 1997."

The most imporant aspect which is not being highlighted is that that 222 million a year is now going to a private corporation and from the profit it makes on that 222 million, some of it goes into the pockets of the senior management and directors as bonuses as well as the dividend cheques of the stockholders.

Even better that most of those stockholders are not United Kingdom of Great Britain and Northern Ireland citizens (the majority stockholder of Arquiva beiing Canada Pension Plan Investment Board) so money is being funneled overseas.

Surely this policy of redistributing public money from the license fee to the bank accounts of private individuals is just what any good Conservative or [right wing] Liberal should applaud and praise Margaret Thatcher and John Major for their policy of piecemeal privatization of the BBC?

Now if only David Cameron had the intelligence and political backbone to privatize more of the BBC and get more public money diverted into the pockets of overseas stockholders, his re-election would be guaranteed and his place in history as being a true capitalist would be assured.

Friedon Miltman's 1 post
T
trevorjharris
sentiment_satisfiedGold
11:11 AM
Quite agree with you Friedon the BBC should be privatized and we can be finaly free of the compulsory license fee. More pensions funds will be able to benifit and the government will benifit from the large amount of corperation tax.

trevorjharris's 367 posts
M
MikeB
sentiment_very_satisfiedPlatinum
11:48 AM
trevorjharris: Your particular world view tends to lead you on a particular direction. Try reading Friedon's post again and imagine him being sarcastic...

MikeB's 2,579 posts
T
trevorjharris
sentiment_satisfiedGold
5:59 PM
MikeB really. It sounded a good idea and everybody wins. We might even get some decent programs. The last few months has been dominated by sports and repeats. Another benefit would be the proceeds of the sale which would help to repay some of the national debt which Gorden Brown left us.

trevorjharris's 367 posts
M
MikeB
sentiment_very_satisfiedPlatinum
6:51 PM
trevorjharris: We've had the World Cup, etc, but there was plenty of other things available, and there were no more repeats than at any other time. Brianist has repeatedly demonstrated that a 'sell-off' would be pointless and economically only bring in a very limited amount of money, even if it were possible.

Of course, the fact that you couldn't work out that Friedon Milton was being sarcastic (the name might have been a giveaway) and was doing what is often called a 'Poe' shows that you have a one track mind. There is none so blind as whose refuse to see.

MikeB's 2,579 posts
T
trevorjharris
sentiment_satisfiedGold
2:11 PM
I do not believe Sky is perfect but they do produce some excellant programes. The coverage of F1 is miles better than that of the BBC. Sky news is ahead of the BBC news which is now very dumbed down

The real issue is the BBC licence fee which means BBC income is limited. If the BBC was set free from the restrictions of the licence fee it would be free to create better programs.