This is a look at sixteen options to fund the BBC in the coming decade. I know you will be surprised by how the options have stacked up: the question is do we change the Licence Fee to one of these smart ideas? 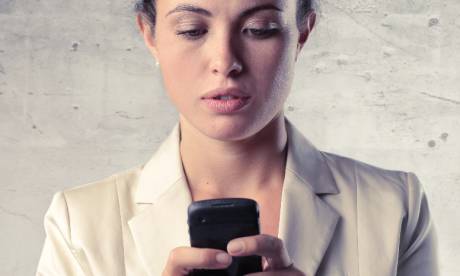 After the feedback from posting the original table (on the BBC 2017: Which of these 14 options is best to collect 4 billion quid a year? page), I have added in two extra lines to the graphic to show the "German Model" (thanks to KMJ,Derby) and "ad funded" (thanks to trevorjharris). 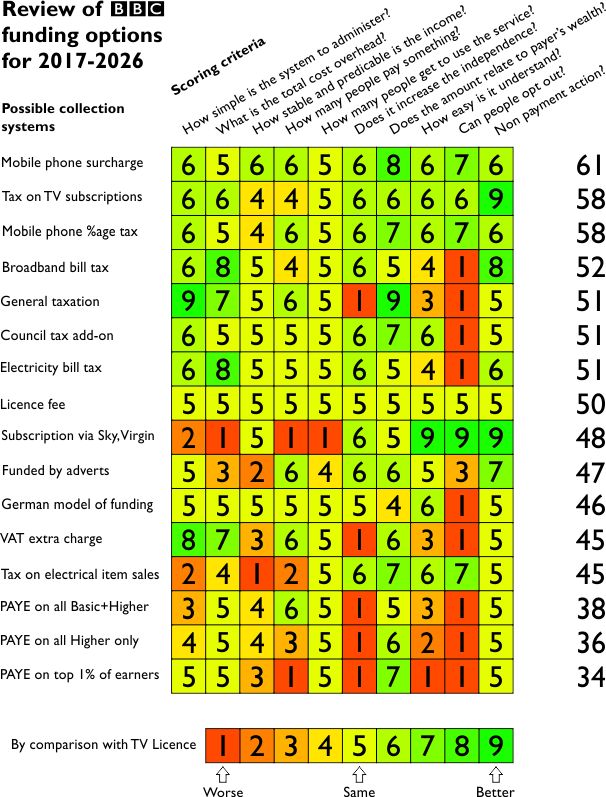 Much of the inspiration for thinking up these funding methods came from this Ofcom - Facts & Figures page. I have reproduced the graphic down the right hand side for your reference.


I thought it was odd this came out on top, but there are obvious advantages. People with PAYG phones would be excluded, so low/no income people would be self-excluded (or those who object to the BBC on principle). As homes with two mobile phones would be revenue neutral, and businesses that supply mobiles to workers would be making a contribution.

The number of contracts would be stable and so the actual monthly value could be adjusted easily. Low income charities might feel the pinch if they have low-cost high-users mobile phone contracts as part of their public services.

It does not seem unreasonable that a household with three or more mobile phone contracts could probably afford £6 a month extra.


This is a simple method of collecting money from homes that have self-selected to pay more for their television service. It would be a charge on 10.5m Sky TV subscribers and 3.8m Virgin TV subscribers. This would mean raising £21.30 a month from each of these homes: they would be £9 worse off, but non-subscribing homes would be £12 a month better off. This would be Progressive, but not in a fair way.

This would make it more progressive: low users would pay less. However the income would be less predicable and this would also be - as most contracts have a device-funding component - a tax on hardware purchase.


This will be revenue neutral for most homes. For most people it would just have the added convenience of making the payment on an existing communications bill. There is certain logic to having the BBC services linked to broadband, especially going forward.


If there could be a way to fix the BBC's income in a way that did not allow a Chancellor to put pressure on BBC News, then this would be an obvious way to fund the BBC. It is the nature of the beast that makes such a proposal only possible in Cloud Cuckoo Land.


This is another form of the TV Licence by another name. The simplicity of all households paying (if they have a TV or not) and the use of the existing collection system of the local councils are key benefits. For most homes this would be revenue-neutral. Band A could pay 50% and the top band 200%, with the in-between bands pro-rata. There could be also a single-occupancy discount.

The usual issues with the council tax (no-income person living in a large house) would arise, but there would be a linkage between wealth and contribution.

If you can pay for the streets to be cleaned this way, why not the BBC?


This method is used in other countries (such as Greece) and could provide a stable, predicable income. It is a per-household charge (but would also require payment from non-domestic use). Would be revenue neutral for most people, but no chasing for payment from the TV Licensing people .


The main objections, such as perceived unfairness for non-TV owners (who are sent terrifying ... letters), and the non-Progressive nature of the tax (every home pays the same, from single poor occupant to rich large family), are usually a Trojan Horse argument. The 3% who do not pay are disproportionally vocal online, as they do not have a TV to entertain them.


I have game-played this option here: BBC, plc 2017: BBC announcement.


The German funding model, where a flat charge is made to every household whether there is TV usage or not, is one option This would stop expensive process of determining if non-payers are evaders or those "freaks" who do not actually have TV set.

This could be done either by giving TVLC the right to charge every home, or by adding a flat charge of £12.50 a month to Council Tax bills of all shapes and sizes.


Put VAT up to 20.9% to fund the BBC and not expect constant political meddling? Are you mad?


The charge would be so high as to double the price of a television. This is basically a non-starter. Even if the charge was to all electrical items and white goods, this would be hated by retailers and loved by people visiting the rest of the EU to buy stuff there.


Putting up the basic rate of income tax is politically not an option.


Getting the "middle earners" to pay for the BBC would render the link between the public and the BBC broken. When not pandering to the politicians, the BBC might become really, really middle class. Or at least have no defence to such an accusation.


The idea of the "1%" paying for the BBC sounds attractive from an envious point of view, but would shift the corporation from service the public to serving the elite.

I hope this fleshes these proposals out in your mind a little more than the raw numbers did. As ever I will be interested to know if you feel that one of these proposals has your support or interest.

All questions
[][][
In this section
Comments
D
David
8:13 PM
You only need a TV License to watch live broadcast TV. You do not currently need a license to watch catch up TV services.

David's 20 posts
B
bored
2:26 PM
David
Friday 25 April 2014 8:13PM
You only need a TV License to watch live broadcast TV. You do not currently need a license to watch catch up TV services.


No - in order to watch catch up you must have the ability to play back TV.
The courts take that as a requirement for a licence. There is no way out of it.
(You have to remember the system is rigged - not "logical").

and a free e-book is avialable here:

Watchkeeper's 1 post
B
Bern Owen
7:49 PM
bored: I object to effectively subsidising the activities of pay-TV offshore video providers who avoid most UK business taxes and do not pay the commercial TV levy like UK terrestrial TV providers.

Simple answer, a levy on the UK income (subscription and advertising) on the video content of all commercial providers with an income over say 5 million. They have to register with Ofcom which also covers adherence to UK standards of content, balance (especially during elections) probity etc.
The levy would raise 1.x times the BBC licence fee where the commercial providers could bid for funds to produce UK focused content, entirely produced in the UK, with UK writers and other resources. A programme of protection for UK culture (the French do something similar).

Bern Owen's 1 post
B
blog
1:33 PM
Hi, I wish for to subscribe for this weblog to obtain hottest updates, therefore where can i
do it please assist.