It never went right for the BBC after it was sold off when the new government decided to "remove the legacy of public service by transferring all broadcasting to the private sector". In less than three years, after compounded mistakes, the old broadcaster is assigned to the recycling bin of history to make way for better mobile broadband. 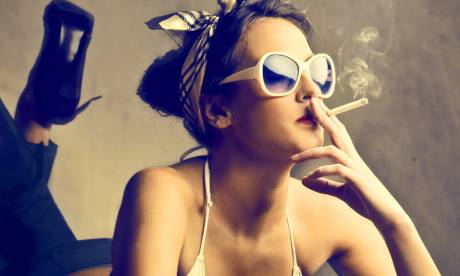 Ofcom today agreed a plan to immediately allocate the TV frequencies of the former BBC to double the 4G mobile broadband capacities. This marks the final passing of the once dominant, former-monopolistic state television and radio broadcaster.

The speed of the decline of the broadcaster has been a sorry tale of mismanagement, misjudgement and bad luck: but from now on those three letters will point only to the past.

The privatization went well enough, but there was already a £2.6bn pension deficit hole to fill.

The initial hubris of the first BBC CEO after privatisation was thinking that four out of five homes would opt to pay £18 a month for the existing BBC channels.

Failing completely to learn from the 2002 ITV Digital debacle, the BBC seriously tried to change 10 million Freeview homes to a pay-TV service: it invested just under £3bn to set up system. The "Beebview" system was troubled just like its pay predecessor: it was unreliable and pirate cards overcame the encryption. The surprise decision by the Treasury not to convert free TV Licences for pensioners into Beebview subscriptions left the system in too few homes to be viable.

It was only after six months of the pay-TV experiment that BBC plc had to admit that subscription levels were running at 40%, just half the predicted level. The first private BBC crisis saw the departure of the CEO. 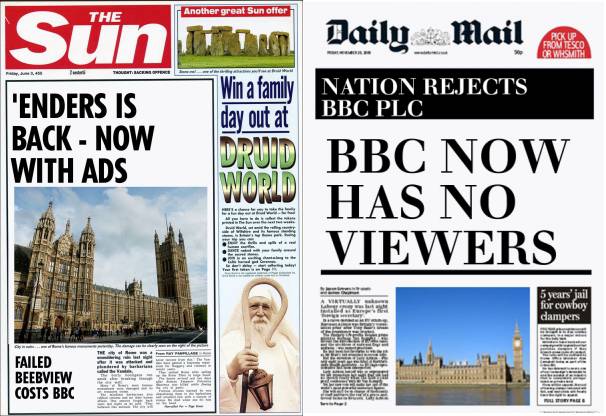 BBC plc was forced to make drastic changes. The new CEO dropped the subscription system in favour of carrying advertising. It was at this point the new CEO announced the immediate closure of everything except a national BBC One, BBC Two and BBC News television channels and Radios 1 and 2. 52 radio stations closed, and the funding was cut for S4C and the World Service radio, both of which closed without ceremony.

The BBC was not best placed for a fight with ITV. It had been "off the air" in many homes for seven months, and the management of ITV put up a tough fight to keep their channels ahead.

The following 18 months were a cycle of decline. The BBC channels were poorly scheduled and padded, initially because they were not planned with 16 minutes per hour of adverts, and later because declining viewing figures stripped the service of income.

Eventually the shareholders received an offer for the BBC from venture capitalists. Happy to make some money back for their investment, the new owners sold the programming (EastEnders is now on ITV), buildings, and archive.

Ofcom had hoped that the buyers would stick to promises to keep BBC News on the air, but when arrangements were made to sell the acquired multiplex capacity for use for 4G broadband, it became clear that the now-token news service days were very numbered.

It is a shame that the epitaph of a once-great corporation is that it burned £8bn. This sad tale is one for future books on economics.


All questions
[][][
In this section
Comments
B
bob
10:56 AM
I will probably get slated for this but the BBC really get on my nerves sometimes.
Yes they have produced some amazing drama, comedy and factual programming over the last 50+ years but they need to sort out their finances.
I really despise the fact I have to pay £150 a year to them under the threat of prosecution, then you see how much money they waste.
£6 million a year for Mr Ross, BBC Newsreaders on £200.000+ a year and that includes most of the regional Newsreaders too.
The lavish expense of Media City and the other dept in Scotland, they spunk money quicker than Kerry Katona after a line of Cocaine!

Yes everyone deserves a good wage but most of the BBC "talent" and management are on incredibly high salaries (not too mention the pensions and benefits!)
If the BBC addressed this issue and stopped siphoning off money via BBC Worldwide (International TV rights) then the license fee could be £100 a year or even cheaper.
And they should certainly digitize their archive for UK residents as we have already paid for these shows via the license fee, so why the hell should I have to buy a DVD of a show I have already paid for?

The way I see it, traditional TV broadcasting will be gone in the next 20 years, everything will be online, on demand when you want it.
The BBC will either be disbanded or simply have to become a subscription service.
After all the whole digital TV switchover now means all the TX's support packed digital bitstreams , they are essentially a wi-fi network and will become that imo

Dare I mention SMART meters and the SMART grid :).

bob's 1 post
Martin Baines
12:08 PM
bob: I agree with most of what you say but on one point you are inaccurate. BBC WorldWide actually is a significant net income generator for the BBC. Last year it brought in the equivalent of about 20% of the licence fee. That is one reason I think it ludicrous to argue it could not survive in the market - in fact it already has some very profitable assets. Of course it would be different and some parts may disappear altogether, but like you I think the days when we could justify a compulsory subscription for TV are long gone. It may have just made some sense when bandwidth was limited and therefore an effective monopoly but today that does not apply.

As for things like salaries - I don't care what people get paid (even if for things like footballers it seems laughably high to me) as long as I have a choice in where I spend my money. I never watch football so am no contributing to their pay (except where the BBC pays for rights :-) ) so it does not affect me. It's the same for every other media outlet - I get to choose if I pay for them or consume their advertising.