Once again we are looking at what happens when in 2015 the new government decided to "remove the legacy of public service by transferring all broadcasting to the private sector". Curiously enough, an edition of Media Talk that had the good fortune to fall through a time warp from three years in the future defined the marketing division of the British Broadcasting Corporation as "a bunch of mindless jerks who were the first against the wall when the revolution came". Or did they? 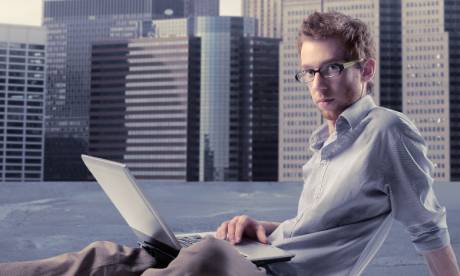 This isn't the real Guardian Media Talk podcast. But nothing on the whole internet comes more highly recommended.

John: Has it really been six months since old licence-funded Auntie has been transformed into a commercial powerhouse? I'm here in the pod with Maggie and Ollie to discuss Six Months of B. B. C. P. L. C. The shares in the "new" company have been rising steadily... Ollie, how's it been for you?

Ollie: Well, it's not been the complete disaster that some people - particularly of this parish - were suggesting. The news service has been bolder, "agenda-setting" even.

John: Maggie, I gather from your body language that you're less in favour.

Maggie: Well, yes. It just means that you have to Sky+ everything you want to watch on any channel now. And the iPlayer is tedious with all those adverts.

John: Let's start with BBC One. If you've been living under a rock since Christmas, (and why wouldn't you?) the former public service channel now carries adverts. Has this spoilt the programmes?

Ollie: Is The One Show any worse for having the ad breaks? I don't think anyone could argue that, and the BBC using more-but-shorter American style advert breaks ...

John: That's because Ofcom has been ordered to lift restrictions on TV advert timings.

Ollie:... yes. Using US-style ad breaks feels less jarring than the 1950s style ITV still uses. But for the viewer, it just means there is less on to watch of an evening. There's still two hours of EastEnders a week, but it is split into five chunks, before it was four. I must admit it still feels a bit odd having ads on the beeb, but they couldn't get the Beebview project off the ground and Sky wouldn't play ball with the subscription option. But at least the BBC is still there.

Maggie: It is almost impossible to see the difference between BBC Two and Channel 4, they are both chasing the second-tier of adverting revenue with cheap lifestyle and quiz programming. The promised daily documentary didn't last very long. And I can't see the point of the daytime classic repeats programming when the BBC already has ten BBC Worldwide themed repeat channels. Time will show if both Channel 4 and BBC Two can survive.

John: At least the kids are still happy: CBeebies and CBBC are holding their ratings.

Ollie: Well, yes. But I have heard rumours that CBBC will start taking advertising soon, leaving only the cheap pre-schooler's channel without ads. But if the corporation is going to make profits for the shareholders then it can't be sentimental about these things.

John: And, Maggie, the Chancellor is cock-a-hoop over ending all those Pensioner's Licence Fee payments.

Maggie: Well, apparently so. But I suspect older people will eventually come off worse here because advertisers are always chasing the younger crowd: they are the ones who switch brands. Those later in life who are fixed in their ways will pay for their retail inflexibility with fewer programmes. Which is why, incidentally, the Bring Back Radio 4 campaigners are unlikely to succeed.

John: Which segues us nicely into the question of BBC Radio: how are the five remaining stations doing?

Ollie: Well the four music stations sound much like they ever did, to be honest. Radio Five Live, sorry, BBC News Radio is much improved with the sport being reduced and has picked up Radio 4 evacuees. Yes, the ads seem a bit jarring at times. I'm told that the RAJAR figures are showing resurgence in the commercial radio stations now the BBC has left the local radio party.

John: How are the vicars and deputy headmasters of the country getting on with Classic FM?

Maggie: It seems that many of the Radio 3 listeners have moved over the commercial station. It makes you wonder why the BBC didn't see a gap for a popular Classics radio station. But, like the regional news service it was far too expensive to be part of a profit making BBC, and we will have to live with it.

John: And finally, a quick answer from both of you, how has the competition been effected by Auntie showing her adverts?

Ollie: There were dire warnings coming from The Upper Ground last year that profits might be hit, but for the moment we are told that there is plenty of ad money to support both ITV and the BBC. If this remains true when we get an economic downturn is anyone's guess.

Maggie: I'm worried for Channel 4: it was having to cut costs before BBC Two started taking adverts. There is even talk of ending Channel 4 News which would be a disaster.

John: Well, thank you both for all that. Next up, TV reviews...