Comux UK, who won the Ofcom licence to operate the local TV multiplexes in 19 major cities and towns are calling their services "Local TV".


Local TV will be promoting the new services, which come on air over the next 12 months starting with Grimsby in November. They have launched a new website today Local TV - Get closer.

Responsible Minister Ed Vaizey says "This agreement marks a key stage in the development of local TV and we will soon see the first station begin broadcasting. The first station to hit the airwaves will launch an entirely new media industry in the UK. These stations are creating new jobs in our communications and creative industries, and providing people with a fresh way to be informed about their local communities." 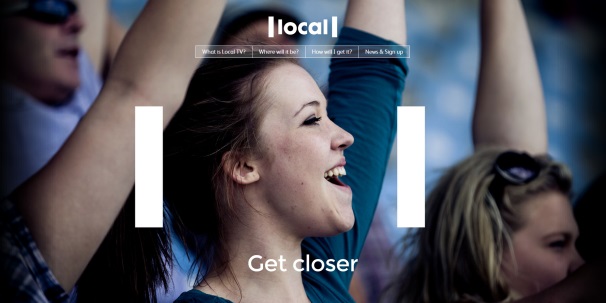 Comux's CEO Ed Hall says "Recently we announced contracts with all of our infrastructure partners and suppliers. We can now deliver the complete technical framework we promised to Ofcom and the 19 local licensees due to start broadcasting from this November. Today's launch of the public-facing Local TV brand means that we can now start promoting the service to the public and ensure that it receives the audience it deserves.

Local TV will become a familiar brand over the next year or two, and we fully expect that the local television service will attract a significant audience in the areas that it is available. Ofcom is currently seeking expressions of interest in a second phase of local stations across another 30 locations, and we are looking forward to the launch of the first station this autumn."

Lia Nici from Channel 7 Grimsby adds "The opportunity to launch our service on Freeview represents a major advance for us and will bring us to a far bigger audience. This has been made possible by the shared infrastructure that Comux UK has put in place which allows us to focus our investments and efforts on programme making. We're, therefore, very pleased that we will be the first station to broadcast on the new service this November."

Alongside broadcasting on digital terrestrial TV, some of the local channels are planning carriage on satellite and cable TV, and online.

Comux UK is owned in equal measure by the local television licensees.


Help with TV/radio stations?
[][][
In this section
Comments
T
Trevor Harris
sentiment_satisfiedGold
11:58 AM
Is there realy a demand for this. Previous attemps such us the Isle of Wight local tv failed.

I would have thought a connected tv app would be much better with programs and local news available on demand.

Trevor Harris's 367 posts
A
Aerialman
sentiment_satisfiedSilver
7:33 PM
Following on from Trevor Harris's comment above.
It will be interesting to see the viewing figures of some of these city broadcasters.
I was involved locally in trying to set up a community radio station in my locality.Our initial aim was to hopefully buy a license and broadcast on FM.
Since i left to date the only produced work,are audio/visual pieces via the net.

Aerialman's 139 posts
Briantist
sentiment_very_satisfiedOwner
8:31 PM
Aerialman: "There will be a non-refundable application fee of £600 payable for each application submitted.

The Broadcasting Act licence fee will be £600 per annum; in addition, relevant turnover (income from advertising and sponsorship) will be subject to the same tariff as that applied to commercial radio licences, which for the financial year 2004/05 has been set at 0.627%. Any amount due will be offset
against the £600 already paid.

Briantist's 38,844 posts
I
Iain Davies
sentiment_satisfiedBronze
3:18 PM
Let's hope the content is better than the Tosh on general TV. !!!

Iain Davies's 38 posts
Watlingfen
sentiment_satisfiedBronze
10:31 PM
My, that's original calling local TV stations 'local' it's almost as staggering as when dear old 'Auntie' BBC re-named her wireless stations abolishing such silly names as Midland, West Region, Northern ect, Home Service and during a corporate 'brain storm' called the 'one size fits all' former Home Service Radio 4 then on a re-think Radio 4UK (that didn't last) just to make sure all listeners were confused , together with the startlingly descriptive Radio1 , Radio 2 and Radio 3 . So whats wrong with calling 'local' LOCAL ?
Try setting your Sky box for an 'alternative' itv region (for regional TV news programmes) , BBC1 no problem, but itv has become a pain. I'm sure these days to work in UK broadcasting (especially commercial) a lobotomy helps.

Watlingfen's 38 posts
Watlingfen
sentiment_satisfiedBronze
11:03 PM
Now I realise this may be classed in these days of DAB (Dead And Buried) broadcasting to the few and a government determined to stamp out Medium Wave and Long Wave broadcasts in and to the UK like spitting on hospital floors, as profane; but whilst you quoted Brian the fees for 'Local' TV if and when it really arrives and those for non-BBC FM stations - what about LPAM (Low Power Amplitude Modulation) broadcast licenses as used by Hospital and Community Stations. After all with no serious national broadcasting now on Medium Wave (Five Live, Asian Network, TalkSport, and a few Gold) and both the government and 'Auntie' predicting the valves will soon go futt on the (so far very reliable for decades) Long Wave 198kHz Radio4 transmitter (they hope!!) it seems surely the space of various stations going digital (in other words to all intents and purposes off the air) could be taken by community LPAM stations, yes?
So may I ask how much these not for profit stations have to pay to be on the air?
It may also happen here as in places like France etc, that stations suffering loss of advertising go from a small audience on digital to a far larger one back on Medium Wave AM .

Watlingfen's 38 posts
Briantist
sentiment_very_satisfiedOwner
11:04 PM
Watlingfen: except, of course, that Radio 4 was a mixture of programmes from the Home Service and Light Programme.

And radio 3 was already the Third Programme.

And the branding was such a failure that it has already lasted for nearly half a century.

ITV is bound by Contract Rights Renewal due to market domination in adverting and can't offer ITV regions outside the broadcast area.

KMJ,Derby's 1,811 posts
Briantist
sentiment_very_satisfiedOwner
11:08 PM
Not sure if we really want to get in to why ALL radio broadcasts want to switch of AM and FM again.

It's not spectrum, it is the expense.

Briantist's 38,844 posts
Briantist
sentiment_very_satisfiedOwner
11:10 PM
Why not follow the link above that I have already posted the answer to community radio charges?