As from today, the whole of the "800MHz" band belongs to Three, EE, Vodafone and O2. If you are not a giant telecoms company, and are using still them for anything, now is probably a good time to stop.


Since 1964, the UHF band (channel 21 to channel 68) has been used exclusively for television services.

The main use, of course, has been over-the-air signals to bring five analogue (and latterly lots of extra digital) TV channels, but a secondary use has been for what is called "RF modulation".

In the days before SCART cables, and long before the not ubiquitous HDMI connections, if you wanted to get a signal from a device such as a video recorder, a games console, home computer or a satellite decoder to a TV set, the only option was to "modulate" it.

If you are still using a device with an RF modulator, you need to check that the channel allocated is not in the C61-C69 range. If it is, then you need to change it for two reasons: to stop an "illegal broadcast" interfering with 4G devices, and to stop 4G transmissions interrupting your video.

The most common devices are Sky Digital boxes produced from October 1998 to about 2010. See How do I change the RF output channel on a Sky Digibox? . 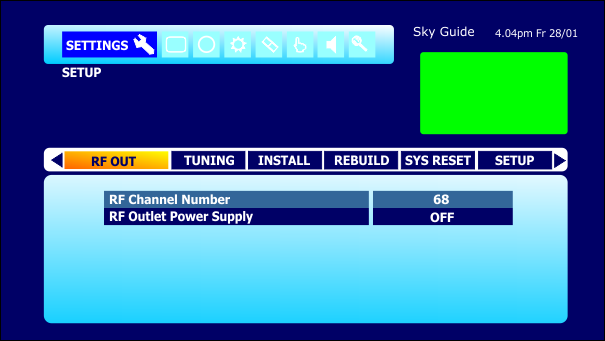 Please don't forget you will need to retune your TV as well as the RF modulator!

If you want to know the best channel to use, enter your postcode into "site settings" box, and see the text that appears there, as shown in this example:

Help with TV/radio stations?
[][][
In this section
Comments
J
john
8:25 PM
My area, just south of Luton, recently became fully covered for 4g. It took me a month to realise that the interference I was experiencing on my Sky box RF Out lines was caused by this.my Sky Plus HD box is 3 years old and had the RF Out channel pre-established to 68. This is now allocated to the 4g telephone companies. Most warnings about 4g interference surrounded users of Free view and never mentioned those using the Sky RF Out channel to feed their bedrooms and kitchens etc.

The solution is simply to reset the Sky RF out channel to another number AWAY from the 60- 69 range used for 4g.

Remember then to Re-Tune your TVs using the Sky RF Out feed.

It's best to avoid channels 60-69 altogether. Adjacent channels can cause interference as well as co-channels.

MikeP's 215 posts
A
Andy
9:21 AM
Hi I've been having these issues for a couple of months, I've changed ref settings but get nothing, I'm in Milton Keynes can you help with a channel number that will work please?

You have not told us what issues you are experiencing nor given a post code to assist locating which specific transmitter you might be using.

Please can you tell me how to access the site settings window you refer to above, so that I can obtain the best Sky box RF out channel number relative to my post code to enable me to receive sky television on a second tv?

Have replaced TV link and gone with F Connectors to improve but have noticed RF2 channel on 68 at present and wanting to know which need change to, before retuning the second TV.

Ajay's 2 posts
J
jb38
sentiment_very_satisfiedPlatinum
6:55 PM
Ajay: I would give 38 a try, as a couple of test codes carried out in the reception predictor from the Ascot area indicates that this channel is not used by any transmitter receivable in the area, Crystal Palace indicated as the station covering the Ascot area.

You should though try checking if the interference vanishes by removing the normal aerials connection into the Sky box, or the I.O port modulator if your Sky+HD box is of the later variety, as if it doesn't, then either the interference is being picked in the cable connecting the Sky box to the 2nd TV, or the problem is possibly being caused by an iffy connection in one of the coax connectors.

I have changed the RF2 channel in the settings on my sky+HD box from 68 to 38 and saved the settings.

The picture is not sharp by any means, but it is clear of any snowy lines or interference.

My setup at home doesn't include an external aerial, so is simply sky dish, with cable, connected to TV via hdmi can then RF2 upto a sky tv link.

My mind is telling me that there must be something in the cabling or connectors preventing a much sharper image......although I know that I am never going to get a HD picture on a RF2 line.

Ajay's 2 posts
D
dave haughton
2:07 PM
Stockport
hi, where do i go to input the post code in site settings, i can't find it anywhere? trying to find the best channel for postcode sk2 5el