Want to run a phase two local TV station? You can apply now

Ofcom is asking for bids to run 23 more local TV stations on Freeview.


Ofcom has asked for bids for the second round of local TV stations today. 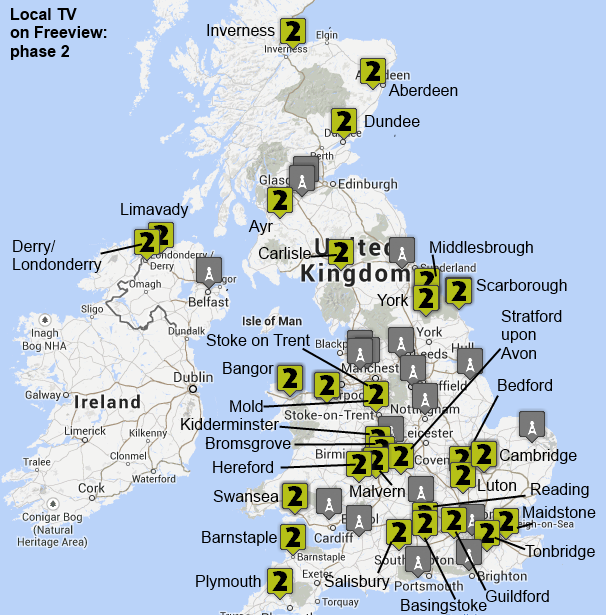 It is notable that Bangor, Cambridge, Middlesbrough, Mold, Scarborough, York and Swansea are not on the list.The closing date for applications for Bangor, Cambridge, Middlesbrough, Mold, Scarborough, Swansea and York is 11 September 2013. It is possible that there may be channels in phase two locations on air by the end of 2014.

In addition, Ofcom is proposing to merge the Maidstone and Tunbridge licences into one licence, and also to merge Hereford and Gloucester into a single licence area.

Help with TV/radio stations?
[][][
In this section
Comments
C
Charles Stuart
sentiment_satisfiedSilver
10:54 PM
Bristol
Have Ofcom published the transmitter power details for each of the phase 1 sites and/or each of the phase 2 sites? Have any of the phase 1 franchisees opted to use better mast positions than was assumed in the forecast maps? If yes, how will these changes affect the areas where reception is possible?

Comux - Homepage | Comux - (see Ofcom | Ofcom awards local TV ‘multiplex’ licence ) has not asked to change any of the locations in their bid.

Briantist's 38,844 posts
J
jj20x
4:44 AM
Actually, they are advertising for the locations you say are not on the list. The closing date for applications being 11 September 2013. The remaining 23 locations in the list to be advertised, in batches, over the next year.

Briantist's 38,844 posts
J
jj20x
7:09 PM
Briantist: Indeed, I noticed the changes earlier. Although perhaps the location markers showing as "3" on the map could also be updated to avoid any confusion.

jj20x's 2 posts
Briantist
sentiment_very_satisfiedOwner
8:08 PM
jj20x: Thanks. Yes, indeed. I updated the interactive map[1], but not the grab of it shown above...

Briantist's 38,844 posts
Stuart Owens
sentiment_satisfiedSilver
12:18 AM
I thought Shrewsbury and Telford were proposed to run local TV channels.
Were the companies with applications for licences rejected by Ofcom or something?
Could they re-apply or anyone else apply for a licence in the future?
And how soon could the winning licence get on the air? (SJ294530)

Stuart Owens's 156 posts
D
david
sentiment_satisfiedBronze
4:03 PM
how far down the list is salisbury for local tv and local dab