The last day of analogue television in the UK - goodbye PAL

23rd October 2012 is the last day that analogue television will be broadcast anywhere in the UK, making way - at last - for a fully digital service throughout the kingdom.


We have already sent NICAM and teletext our departing wishes, now we turn to the main analogue transmission system, PAL.

The original television services broadcast in the UK, the BBC from the 1936 (apart from being suspended during WWII) and from 22nd September 1955 the IBA services, were broadcast using the Marconi-EMI "system A" 405-line service.

These services were broadcast on VHF frequencies, and provided 377 active lines of picture at about 414 modern pixels - 156,078 pixels or 0.15 megapixels. As VHF signals travel long distances, the BBC had only around 70 transmitters**, and the IBA over 40***:

However, by the 1960s it became apparent that television technology was moving on. In the USA, colour services using the NTSC standard had been implemented and many more than two channels were being broadcast. An often-quoted meaning for NTSC as "Never Twice the Same Colour" had at least a grain of truth.

In the UK, it was decided that television would move to a different standard called Phase Alternating Line which, as often seems to happen, was referred to as "high definition".

The PAL service would need to be broadcast on UHF frequencies, to provide enough bandwidth for the increased picture quality, often called "625 lines" - and colour.

The 625 lines was a bit of an over-statement of the service provided. Only 576 lines were used for the picture, as the other 49 were required to allow the receiver equipment time to synchronise at the top of the screen and reverse course upwards at the end - this is how the cathode ray tube system worked.

In today's terms, the picture resolution was 720 wide by 576 high, which is 414,720 pixels, or about 0.4 megapixels. This was about 2.7 times that provided before. More at A comparison of TV, HDTV and computer monitors.

The upgraded system was designed to be watch on both "black and white" television sets, which attached a lower Licence Fee, as well as the new-fangled colour television sets. This is done by providing a monochrome signal and adding to it a 'colour information' signal in parallel, which could be safely ignored by cheaper sets.

The first service to be provided this way was BBC TWO, which went on air on 20 April 1964, with colour programmes from July 1967. Following on from this the BBC ONE and IBA channels began broadcasting on both systems - and this continued until the mid 1980s.

The UHF frequency plan had always allowed for four and a half channels to be broadcast (using the UHF channels from C21 to C68). So, S4C in Wales and Channel 4 in the rest of the UK started at the beginning of November 1982. It would take an amazing fifteen years for Channel 5 to start on 30th March 1997. And it will only be the final digital switchover that brings Channel 5 to the whole of the UK, due to it having only "half" an analogue channel allocation.

PAL is often referred to by engineers as "People Are Lavender" because the colour encoding, whilst better than some other analogue systems, is poor at producing skin tones. This is why the "test card F" featured the face of 8 year-old Carole Hersee, (holding chalk over the centre of the screen on the "X" of the noughts and crosses) next to a lavender-faced clown toy.

And so, it is now time to say a final farewell to analogue interference effects. Goodbye to overlaid channels, to loss of colour, to snowy and blurred pictures: 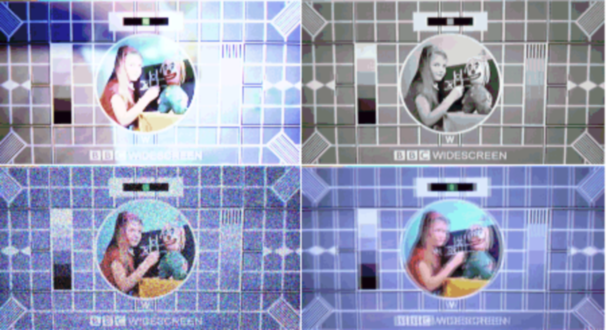 And goodbye to regular problems with the Inversion Effect! Digital reception has the famous "digital cliff" - either you have a strong enough signal for a perfect picture, or nothing at all.


Help with Freeview, aerials?
[][][
In this section
Comments
P
PETER HUGHES
8:46 PM
The listing of BBC 1 VHF Television transmitters does not appear to have included MANNINGTREE, Essex, which gave a horizontal polarised service to part of East Anglia on VHF Channel 4. Manningtree is still in service BUT now as a Radio FM transmitter

PETER HUGHES's 13 posts
Briantist
sentiment_very_satisfiedOwner
8:48 PM
Iain Davies: I did mention that in the fourth paragraph...

What a lousy system it was. To prevent cross-colour the luminance had to be restricted to 3MHz so that Y and C were transmitted in separate sub-bands with no overlap.

David Robinson's 14 posts
Heinz
sentiment_satisfiedBronze
11:17 AM
Colchester
23 October 2012 most certainly wasn't the end of PAL in the UK.

In fact, only yesterday I resurrected PAL as the reception medium for on of my PVRs. This was because my Sky HD box only has one scart output and so the second PVR had to be connected via RF (UHF 22 in my case).

Why have 2 PVRs if you already have Sky+ HD you may ask? Basically I thought I ought o buy the new 1TB Panasonic DMR BWT735EB becaue, by a number of accounts, it's possible it may be the last model of PVR having an analogue (SCART) input.

Heinz's 25 posts
A
Andy Merrett
11:20 PM
The digital cliff is not completely accurate - if it were there would be no pixellated interference or dodgy sound. It's still possible to get partial pictures. It's not simply "on or off" although it is fair to say the signal doesn't have to degrade much before it totally disappears (or, perhaps more accurately, the receiving digital 'box' and/or software decides the signal isn't strong enough and just cuts it out).

As has already been mentioned it's also not true that PAL has died. Many people still run digital boxes through to analogue connectors/TVs.