As part of the plan to upgrade DAB system, the operator of four regional radio multiplexes plans to close them next year, to release the frequencies for conventional radio coverage areas.

To do this, the regional multiplexes will be closed and their frequencies used to do a large-scale replanning, incorporating a new one called 5A. 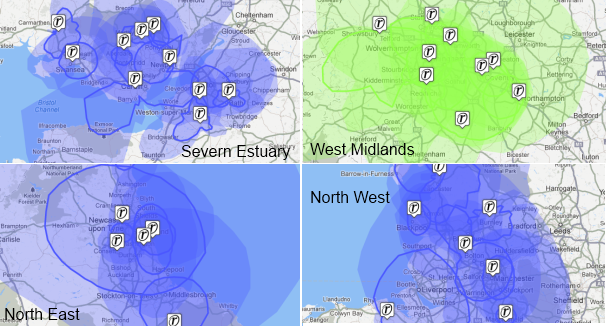 MXR will close the following multiplexes: 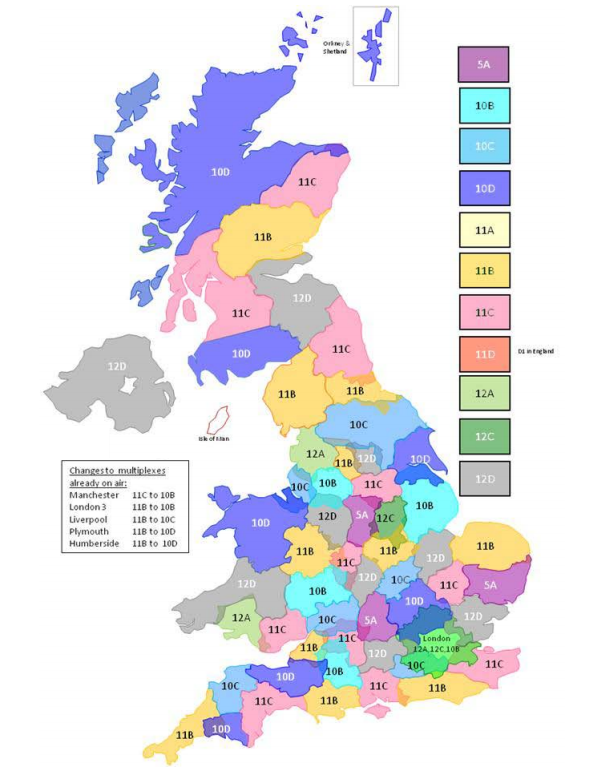 Diagram from Ofcom - An approach to DAB coverage planning.

"The expansion issue I refered to was that the DAB system has a limit on the spacial density of transmitters. As I understand it this limit has been reached in many areas."

This is a completely wrong statement I'm afraid. The BBC has plans to add another 175 transmitters to its national multiplex, and there will be around 500 transmitters added to local multiplexes over the next 4-5 years.

Mark's 181 posts
Briantist
sentiment_very_satisfiedOwner
7:01 PM
Mark: I was very impressed with the "how to do a pirate DAB radio station" report from Ofcom today.

The reality is that as the DAB patents have all expired, and you can make a transmitter using cheap hardware and not a lot of software, it might be possible now to allocate DAB to groups of community stations.

It certainly would be useful to lower the costs...

Briantist's 38,844 posts
M
michael
sentiment_satisfiedGold
10:50 PM
... and it might persuade the BBC to add more DAB fillers for BBC local and regional radio. On the other hand, making the technically relative simplicity of diy DAB so public, as Ofcom now has, could lead to saturation problems in some areas.

michael's 857 posts
T
trevorjharris
sentiment_satisfiedGold
12:09 AM
Had a quick look at Ofcoms paper and checked it wasn't April Fools day. Although techncally interesting it still suffers from all the disadvantages of DAB. Of course only a small proportion of people have DAB radios and everyone has at least one FM radio.

In any case it has nothing to do with the Governments plan to force people to buy DAB radios by threatening to switch off national FM.

Interestingly Ruxandra Obreja is Chair of the DRM Consortium, and Head of Digital Radio Development ,BBC World Service, UK. So the BBC is very involved in the development of DRM.

Came acros this rather good Webinar


trevorjharris's 367 posts
Briantist
sentiment_very_satisfiedOwner
6:22 AM
michael: I did think be very useful for DAB if someone could put together a simple, cheap "microcell" solution.

The main problem for this is one of timing. The BBC national multiplex (and most other local ones) are SFN (single frequency networks) and each new transmitter has to be synchronised.

So, you can't "relay" a signal, each new node needs access to the "master" multiplex.

The internet, being a asynchronous service isn't really suitable for this - unless you could buffer the data enough - so you would probably have to use satellite distribution, or possibly ISDN30.

DAB is an efficient solution for local/regional terrestrial broadcast in case of many services with identical coverage area (multiplex transmissions).

"Of course only a small proportion of people have DAB radios and everyone has at least one FM radio."

Mark's 181 posts
M
michael
sentiment_satisfiedGold
8:31 PM
It would seem evident that the future remains uncertain. The new diy DAB technology might well be a viable compromise to fill DAB gaps - and enrapture pirates and community broadcasters. Software magic should surely be able to conjure up an SFN solution where needed. For the foreseeable future, it has to be a combination of DAB and FM (hopefully with vestiges of AM where neither of the above will provide a continuing service. DAB+ and DRM would have been better choices, but it would be disastrous to expect listeners to now ditch their DAB radios after so much relentles plugging. The DAB take-up statistics do not indicate how many DAB radios each household has acquired. FM will be in many rooms, plus portable - so it would burden the household budget in difficult times for each to equal its FM assets - assuming equal coverage.