If you live in the Brougher Mountain, Divis, or Limavady transmitter areas - you will need to perform a 'first time' retune on your Freeview TV or set-top box when you get up for breakfast on this Wednesday morning.

Starting just after midnight on Wednesday 24th October, the next switchover of 2012 will see the number of homes with digital-only terrestrial reception in the UK go up by 647,500 from 97.54% to completed.

Viewers in Northern Ireland who use the Brougher Mountain, Divis, or Limavady "full Freeview" transmitters (and about 43 smaller relay transmitters) will have no analogue television from Wednesday 24th October 2012. Unless you use cable or satellite to watch television, if you don't use a Freeview box or set, your screen will be blank.

Do not expect ANY FREEVIEW television service from midnight until 6am - or a late as mid-afternoon on some relay transmitters (see below for timetable). This means you will not be able to record Freeview programmes overnight. --- but you can watch online here - Watch live UK TV channels and listen to live radio now.

Most people need only perform a "full retune" (or "factory reset" or "shipping condition") on their Freeview box or TV, but it would be impossible with five million homes covered by the transmitters, for no-one to have a problem.

RTE One, RTE Two and TG4

Viewers with Freeview HD (DVB-T2) equipment who receive a signal from the Brougher Mountain, Black Mountain and Carnmoney Hill will also receive the "Northern Ireland Mini-Multiplex" and will receive RTE One and RTE Two and TG4. See Northern Ireland RTE1, RTE2, TG4 special mini-multiplex from 24 October. Most other viewers will be able to watch services directly from transmitters in the republic. You will need the correct equipment: 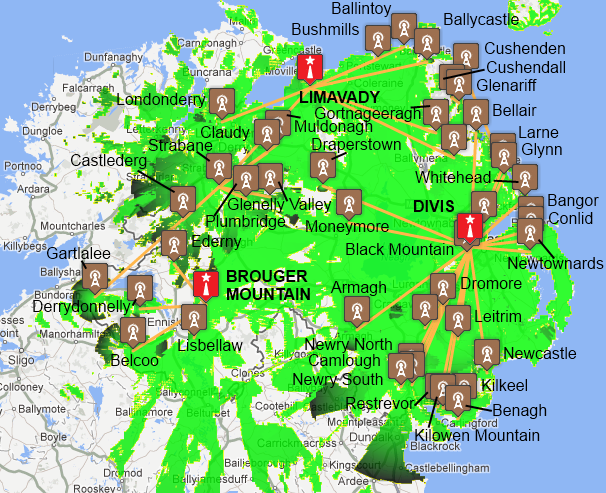 Homes with no Freeview at all will now have Freeview Light

If you had no Freeview service before, you will have the BBC channels digitally from Wednesday 10th October 2012. This is a single multiplex of the BBC channels (radio, television and text) for most people.

If you didn't get this limited Freeview service on Wednesday 10th October 2012 then you may need a new aerial.

Overlap with other regions

Because of the location of the transmitters, some viewers will find that they can pick up the signal from other BBC and ITV 1 regional studios.

Those viewers with "Freeview HD" (or other so called D-Book 7) receivers will find they are presented with a menu to allow them to pick which BBC One region is shown on "button 1", and which ITV 1 regions appears as channel 3.

Viewers with older equipment may have to resort to doing a manual to get the correct signal for the desired transmitter.

Some Freeview boxes will pick the strongest signals for the "primary" number positions, and some will detect the different regions providing a choice when you perform a "scan for channels".

Help with Freeview, aerials?
[][][
In this section
Comments
S
sonia morrow
10:24 AM
What channel is tv3 on via SKY in N.Ireland. Thank you

sonia morrow's 1 post
Dave Lindsay
sentiment_very_satisfiedPlatinum
10:59 AM
sonia morrow: Some forums say it's not available in the North. The only possibility is: can you receive it from one of the terrestrial transmitters in the South?

As Dave quite correctly states, it's only available to viewers in NI via terrestrial transmitters.

PJH's 1 post
J
jb38
sentiment_very_satisfiedPlatinum
5:06 PM
sonia morrow : In addition to that said, although TV3 along with RT1/2, TG4, 3E etc can easily be tuned in on a Sky boxes "add channels" facility, unfortunately they cannot be viewed using a standard Sky UK viewing card, as a card issued for an address in the Irish Republic is required.