I have, once again, revised the 'transmission frequencies' section found on all of the transmitter pages. The revised format, which is larger and better spaced, now shows confirmed changes in 2013, as well as two Ofcom planning scenarios for 2015 and 2020.


Following on from your comments on the Improvement to "Transmission frequencies" on transmitter pages page, I have made some more changes to the layout.

Firstly, I have rotated the table around, so that time goes from left to right, and the channel numbers are ordered vertically. This has allowed the font size to be restored to match the rest of the site.

Here is an example of the new format. The current configuration is shown in bold with clear black lines to the left and right. To the right are three columns showing changes in 2013 (if any), and two Ofcom plans, one for "lots more digital TV", which is shown as "2015?" and one for "lots more 4G mobile broadband", denoted by "2020?". 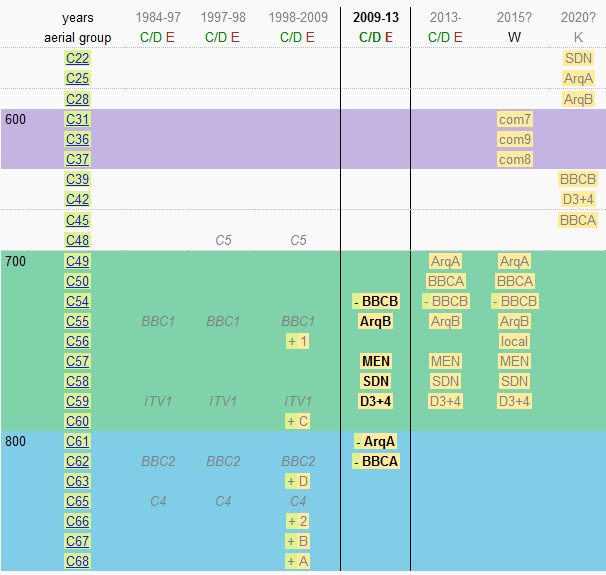 The notes below the table provide links to the planning information. This is, I hope, much easier to read than the previous version, shown here: 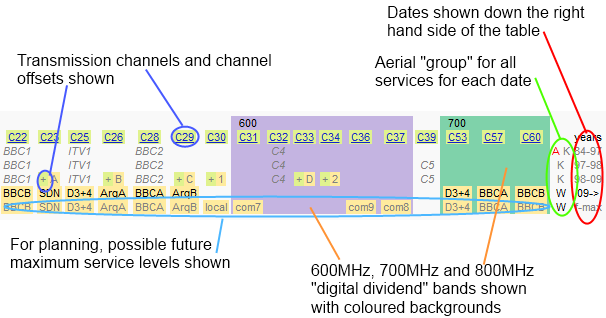 All questions
[][][
In this section
Comments
R
Richard Hester
7:25 PM
Godalming
I have tried to re-tune my TOSHIBA digital tv using auto-scan on the Midhurst transmitter (our desired Meridian mast)but the only station it comes-up with is ITV Meridian South-Central(which is fine ) but no BBC 1;BBC 2; Channel 4; Channel 5.
Can anyone help me with the manual frequency settings, plus H&V,
We have no Freeview capability on this tv !
Thanks for your time !

What model of Toshiba do you have?

jb38's 7,179 posts
D
Doreen Birks
12:08 PM
Polegate
A TV undertook to adjust my household tvs on May 30th and again today the 13th June. He informs me furtheer adjustment is required on in 2 weeks time and will reattend. Is this necessary and true?

COM4 (SDN) from Heathfield remains on its pre-switchover frequency until 27th. This is due to its final frequency being used by transmitters in Kent until they switch-over on that date.

Scroll down to the table for COM4 to see which services this affects. They are ITV3, QVC and others. If retuning isn't carried out, then these will be unavailable from 27th.

Dave Lindsay's 5,724 posts
J
John
2:56 PM
My reciever is a Humax HD-Fox-T2 and I am located in Swindon. My local transmitter is Mendip. Lately I have had reception problems with all BBC channels with the exception of the two HD channels.The picture is intermitently pixelating every single day. Sometimes I get a screen message that says that there is no signal. All of the other channels are unaffected. I get perfect reception on ITV, Channel 4, Channel 5, Really, Yesterday, Sky News etc. Can anyone shed any light on this problem? I am getting pretty fed up with it. Oh, and by the way I have re-booted, and carried out clean reinstalls countless times. It makes no difference. Perfect recption on all channels except for the BBC channels.

John's 12 posts
Dave Lindsay
sentiment_very_satisfiedPlatinum
3:22 PM
John: Perhaps your receiver is tuning to the Seagry Court transmitter for BBC standard definition which is on UHF channel 41. It should be tuned to Mendip on C61.

Carrying out a retune should only be done in order to tune the receiver differently to what it already is. Have you established whether this is the case or not?

As Einstein said, insanity is doing the same thing over and over again and expecting different results.

If your receiver is picking up BBC from Seagry Court, then it's unlikely that this would change, irrespective of how many times you try.

The signal strength screen should tell you whether BBC One is tuned to C41 or C61. If it is tuned to Seagry Court, then run the automatic tuning scan through with the aerial unplugged up until 55% or C48. This will miss out scanning of its channels. Then go to the manual tuning function and tune to C48 for ITV3 and associated services. If Yesterday is missing, manually tune to C52 and if ITV1 is missing, manually tune to C54.

These manual tunes are necessary due to possible inaccuracy in getting the aerial lead back in. The highest frequency used by Seagry Court is next to the lowest of Mendip (which is C48).

Thank you for your reply, and for your suggestion about Seagry Court. I will have a play and check that out. I will let you know how I get on.

John's 12 posts
J
John
7:16 PM
Swindon
Dave,
I have now had a little "play" and have checked out where I am getting my BBC signal from, and I am indeed tuned to C61 on the Mendip transmitter. Not Seagry Court. Today for some reason, BBC reception is perfect, same signal strength and signal quality as all the other channels. So what is going on with the BBC signal I wonder? Last night with the exception of the BBC HD channels the BBC channels were unwatchable. I did in fact contact the BBC and their response was that it was a software error that would be corrected by unplugging the box for 10 minutes and then switching it back on. Alternatively the problem might be due to atmospheric conditions. What nonsense, and not at all helpful! The BBC totally ignored the fact that is only their channels that are problematic. I am begining to think that the power is being reduced without any anouncement. If there was any fault with my equipment, or there was any adverse weather or atmospheric conditions then surely all Freeview channels would be equaly affected? not just the Beeb.