How is it possible to broadcast high definition television or more standard definition services on the same physical wavelength?


As mentioned in How digital television works Freeview signals can be broadcast in a number of different "modes", which are a combination of five parameters. Some of these have changed over the years because the increase in computing power has made more efficient methods of broadcasting cheap enough to fit in a set-top box - it is now possible to broadcast high definition television or more standard definition services on the same physical wavelength.

As some of the ideas that are implemented would fill a text book by themselves, I have presented the concepts in a simplified way.

Each Freeview multiplex is broadcast within an 8MHz channel that was originally allocated to analogue television. Rather than being a single broadcast, the channel is split into a number of different signals that sit next to each other.

It is possible to space carriers so close together because they are carrying digital information, in the analogue domain the problem with sidebands would render a similar system useless.

For reasons detailed below, the information is not transmitted in single bits on each carrier, but as groups of bits which are referred to as "symbols". Each symbol is held in the transmission system for a given duration, 1024 us. The longer this time is, the less information is carried, but too short a duration for each symbol would not allow the receiver to detect the information correctly.

Each subcarrier also uses a guard interval, which turns off each carrier as part of the transmission cycle. With SD broadcasts, this is 1/32th of the symbol time (32us), on HD it is 1/128th (8us). The guard intervals start each symbol and exist to deal with the problems of multipath - where the signal is being received directly and also by reflections. 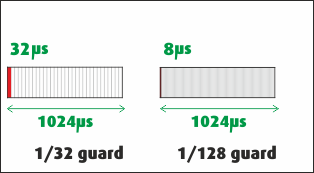 In non-synchronous digital transmission systems, such as those used for the internet, the presence of data corruption between the sender and receiver can be signalled back to the source and the data resent.

However, a digital broadcast is a one-to-many unidirectional system, with no ability to ask for data to be resent.

For this reason, the transmissions use "forward error correction", which is a system that allows a certain level of errors to be detected.

The most basic form of a forward error correction (FEC) would be to transmit each bit twice - as long as each bit was sent along a separate subcarrier, then a single bit loss on one carrier could corrected by using the one sent on the other carrier. However, this is very inefficient, as it reduces the useful capacity of the system by half.

So, instead the DVB-T system uses a Punctured Convolution coding system. Instead of sending each bit twice, bits are grouped and then a code that describes the bits in a way that a single bit error can be detected and corrected most of the time.

In the above descriptions, the word "symbol" was used to describe what is transmitted. You may have thought that a digital system would transmit information on the subcarriers as bits. However, doing this in a broadcast system is actually unproductive.

For this reason, quadrature amplitude modulation is used. This takes the incoming bits and encodes them in groups. The most basic form encodes bits two at a time, using sine (Q) and cosine (I) functions that are then added to the main carrier. In effect "00" is encoded as -Q-I, "11" as +Q+I, with "01" and "10" being +Q-I and -Q+I.

There are 10 modes defined for use in the UK, these are:

Diagram showing capacity for each mode:

Help with Television sets?
[][][
In this section
Comments
C
coiherers
3:44 PM
Excellent readily comprehensible description of how all this new fangled digital TV business works. Thanks!

coiherers's 1 post
N
Nigel Cory
4:59 PM
Flim and anyone else who is interested in having copies of Brian's excellent articles, I have taken the liberty of copying and pasting both into a Word document (I hope you don't mind Brian).

If you go to my web page (http://www.nigelcory.co.uk/) which is despite the title, just a private site, leave a message on the 'Dream Book' page with your email address and I will send a copy of the document to you.

Nigel Cory's 7 posts
N
Natasha
10:00 PM
Oxford
Hello, I live in OX3 0RH area,I have SONY TV and a Bush freeview box. In the last couple of weeks i realised that the sound of all of my channels dissapears. Sometime it is just for a little while and then it comes back, and sometimes it is for a couple of hours, and sometimes it is all fine. I have rescanned and re-set all the channels and it did not help. Could you advise me something? Thank you, natasha

Natasha's 1 post
S
Scott
sentiment_satisfiedSilver
2:56 PM
It sounds to me (excuse the pun) that either your decoder box or your TV is faulty. I would first try the decoder with a different TV then the TV with a different decoder box. I assume you could borrow equipment from friends to do this.

Scott's 110 posts
J
jb38
sentiment_very_satisfiedPlatinum
9:24 PM
Natasha: You should check to make sure that the scart lead between both devices hasn't came out slightly so make sure they are fully seated, also by you being located at only 3 miles away from the transmitter its very possible that your box is suffering from an excessively high level of signal and that type of situation can trigger all sorts of odd problems to occur, so maybe you could indicate what type of aerial you are using.

jb38's 7,179 posts
J
Jill
7:30 PM
London
I live in London N10 2ET area.I retuned my Freeview TV as required at switchover and received all the channels.
Since Monday 30 April I have very poor reception on the ITV channels (multiplex 2 and multplex A)and some interference on multiplex C. There are no engineering works which might be causing this.
Do I need to get the aerial checked?

Jill's 1 post
M
Mark Fletcher
sentiment_satisfiedGold
9:51 PM
London
Jill.London,N10 2ET.One possibility is you may have too much signal,or the likelyhood but unlikely that the Alexandra Palace relay which is very close by at your location could affect Crystal Palace transmissions you receive in your locality.Try a set-top aerial or either a piece of wire or a coat hanger in your aerial socket of your device and rescan.You may have to consider resetting your device to clear the previous memory,then perform a rescan without any aerial connections first time,it will find no channels then rescan again with your main aerial in,it may just do the trick.
If it fails then you may certainly do need to check your aerial,especially for any sign of ageing of aerial co-ax cabling and co-ax plug too,and importantly check that your current aerial is a group A type (tipped red).

Mark Fletcher's 673 posts
M
Mark Fletcher
sentiment_satisfiedGold
9:54 PM
Halifax
Correction yet again concerning my location which is Halifax not London.Apologises once more for my wee mistake !

Mark Fletcher's 673 posts
J
JC
6:31 AM
I am served by the Heathfield transmitter. I have an outside aerial. It is a narrow band as the elements are the same distance apart but I'm not sure which band. Digital reception is a bit 'blocky' occasionally on some channels. Signal strength as measured by a finder is only 50 db (uv). After switchover the band seems to change twice! (also in 2015) what sort of aerial (broadband, narrowband) should be fitted and what band if narrowband?

I suggest that you wait until 13th June to assess whether you need a different aerial. Before switchover, for four channel analogue, Heathfield is Group C/D (roughly top third of the band used for TV).

The current digital broadcasts have a much lower transmission power than will be used after switchover and some are out of group as well.

After switchover it will be Group B (middle third of the band). However, there is a bit of overlap between the official definitions of B and C/D. Also, aerials drop off in sensitivity and don't receive nothing on "out of group" channels.

The link takes you to the C/D group traces.

Information on aerial groups is here: