The return of the regional television maps

They have been missing in action for some time, but now they're back and improved - once again you can browse the TV transmitter regions in glorious yellow and green.


I'm not quite sure why they disappeared, but at some point the once-popular TV region maps were removed.

As from today, the maps have been recreated using the Google mapping system, and are now much more interactive than the old maps. 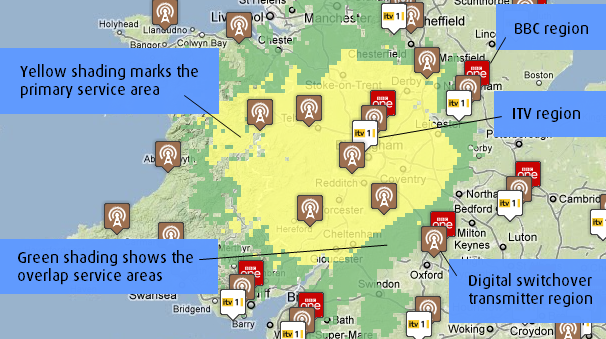 Click the symbol once to see the yellow and green service areas, double-click to see all the transmitters in the selected region.

You can now look at three types of map.

The BBC One television region maps show the area covered by the main transmitters and relays.

The ITV1 region maps work in a similar way.

In addition you can also view the much smaller "digital switchover" transmitter regions.


All questions
[][][
In this section
Comments
A
alan tilbury
11:29 AM
I have just cancelled my Sky subscription and opted for Sky FreeSat. What I didn't realise before doing this is that although having an HD box you can no longer use it to record or watch one channel while recording another so in effect one input line becomes redundant. As I am retaining my Sky Broadband and Sky talk I also have to pay an extra £2.50 a month for my broadband plus of course I had to purchase a Sky Freesat viewing card for £25 to watch the additional channels that you do not receive by just using the original card. I thought perhaps you could publicise these facts when people ask about cancelling their Sky TV subscriptions