Will there ever be more services on the Freeview Light transmitters?

The short answer is no; as that seems unreasonable, here is a longer answer.


The digital terrestrial service that is known today as Freeview, started life in Parliament as the Broadcasting Act 1996.

Part I act gave the regulator, then the Independent Television Commission, the authority to establish digital terrestrial television services in the UK, and paved the way for a "six multiplex" service. One multiplex was reserved for the BBC, a second jointly between the "Channel 3 licence holder", Channel 4, Gaelic programming in Scotland plus Teletext UK as the "national teletext provider"

One half of the third multiplex was passed to Channel 5 and the S4C Corporation, with the remaining three and a half being put up for a public auction. The ITC duly awarded the remaining three multiplexes to "British Digital Broadcasting" in 1997, which was a combination of two big ITV companies at the time, Carlton and Granada.

On Sunday 15th November 1998, the services was launched under the name "ONdigital", a mixture of free-to-air and pay services, and rather dwarfed by the launch six weeks earlier of the much superior Sky Digital service.

ONdigital renamed itself ITVdigital on 11th July 2001, but the woollen monkey toy in the adverts proved more popular than the service, and the service closed on 1st May 2002.

It became clear (especially to BBC director-general Greg Dyke, pictured right) that the digital terrestrial service was popular with viewers, but it was unsuitable as a pay-TV platform.

ITVdigital handed back three multiplex licences to the ITC, and the ITC then re-awarded one to the BBC and the other two to Crown Castle International, a company formed when the BBC's engineering division was sold off.

A company, DTV Services, formed to publicise the new service, which was now called Freeview.

Sky joined in, and purchased slots on the new service (from CCI) for Sky News, Sky Sports News and Sky Travel. Also there from the start of Freeview was Flextech Television "ftn", music channel TMF, UKTV's UK History and UK Bright Ideas, and shopping channel, QVC

When it was decided that the analogue television signals would be turned off, the BBC, as it funded by a universal fee decided that it must provide the two multiplexes of services to all homes. 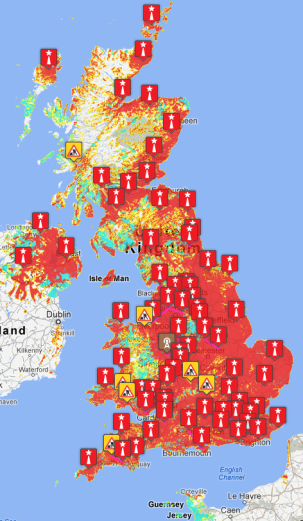 Ofcom, now the regulator, decreed that the multiplex shared by Channel 3 and Channel 4 (called "Digital 3 and 4 Ltd") must also provide service to all homes that had analogue. This was because Channel 4 already provided this level of coverage, and as the licence holder for Channel 3 has "public service obligations", the broadcasting of multiplex 2 should also extend to all existing TV masts.

However, for the commercial multiplexes, Ofcom simply invited Crown Castle Ltd and S4C Digital Networks (SDN) to apply to extend their networks. Ofcom, having granted the multiplex licences already, felt it had no legal power of compulsion to insist more homes were served, and in December 2006 announced that no application had been received - at this point Ofcom no longer planned for additional frequencies for the commercial multiplexes.

Both commercial operators decided that the cost of providing the equipment, installation and ongoing operation of services from the 1,000 smaller transmitters would cost more than any additional revenue they could get from the TV channels that rent their broadcast capacity, as the work would only expand the actual number of homes broadcast to by 9%.

Since this time, S4C Digital Networks multiplex was bought by ITV plc, and Arqiva acquired the CCI multiplexes. For this reason the commercial multiplexes are known as SDN, ArqA and ArqB. 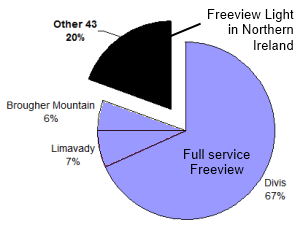 The map shows the locations where Freeview Light service is generally the only Freeview reception option.

See also: Where are the public service (Freeview Light) transmitters?


Help with Freeview, aerials?
[][][
In this section
Comments
MikeP
sentiment_very_satisfiedPlatinum
10:38 AM
Richard West:

Only if and when the relay is converted to use DVB-T2 transmission encoding is it ever likely to be included. There is currently insufficient capacity to add any more channels to a 'lite' transmitter.

MikeP's 3,056 posts
J
john lightbown
12:09 PM
Hi, why cant I receive talking pictures on channel 81 in Blackpool yet Freeview web site says it is available at my postcode. I have a 3 day old Hitachi smart TV which has not got channels 81/82 on it menu?? our communal aerial has been professionally changed to receive digital signals for Freeview and no one in our block receives channel 81/82 for talking pictures, I have recently moved from Derby where I had channel 81on both my old TV but not here on my old TV so I decided to get a smart TV and cant get it here, I have retuned and reset by switching TV off the tuning without aerial input to clear its memory then full retune with the aerial in and still cant receive channel 81 for Talking Pictures.all Other channels on Freeview are perfect no complaints there, I receive my signal from winter hill main transmitter. would appreciate any help please.

john lightbown's 1 post
S
StevensOnln1
sentiment_very_satisfiedPlatinum
1:32 PM
john lightbown: Are you able to receive BBC News HD on 107? Communal aerial systems often use filters to block unwanted signals so it may be that the filtering on yours wasn't changed to allow reception of the COM7 multiplex when it launched back in 2014 - if this is the case you would need to contact whoever is responsible for managing your building and ask them to sort it out.

K watts's 1 post
M
MikeB
sentiment_very_satisfiedPlatinum
10:23 PM
Peterborough
K watts: Put your postcode into the site and it will bring up your transmitter. But realistically, its your system.

MikeB's 2,579 posts
B
Brian
7:22 AM
What on EARTH IS THE USE OF S4C? Whaaaat is the channels watching capacity?

Brian's 3 posts
B
Brian
7:26 AM
This is An Absolute Insult. We Pay same tv license as the rest of the uk, so in our area we don't get all the channels on freeview?

Brian's 3 posts
M
MikeB
sentiment_very_satisfiedPlatinum
10:02 AM
Peterborough
Brian: Because you live in an area with very few people and commercial channels are just that - commercial. Something thats been pointed out endlessly on this thread if you'd read it.

So they dont think you worth broadcasting to. If you want more, get Freesat.

MikeB's 2,579 posts
R
Richard Keirle
11:09 AM
It's about time a stop was put to the shuffling of Freeview channel numbers every few weeks.
This frequent reshuffling causes huge problems, especially for older people, particularly when there are 2 or 3, or more, television sets and seperate freeview recorders in one household.
Will there ever come a time, when Freeview channels cease being juggled around ?

Yours, Richard I Keirle

There has been no 're-shuffling' of the Freeview channels for several years. There is a planned change due in the next couple of years to clear the TV transmissions from the 700MHz band to make room for more mobile services. The frequencies allocated to each transmitter site have remained largely unchanged since 2012, but a few services have been added a few years ago on the COM7 and COM8 multiplexes.

Some of the commercial providers change from time to time as their commercial pressures either force a closure or enable a new service to be opened. But the 'new' ones will re-use the existing channels that has been vacated by the closed services. Other commercial services decide to use a different channel in agreement with either Ofcom or Freeview.

So I don't understand why you think the frequencies used keep changing. If you provide a full post code, we can look up what channels are being used by your local transmitter and see whather your reception conditions lead to a variability in your signal.