Try this: pop out to Tesco and when you get to the checkout, demand that they pay you to take the goods away. When they ask why, say "I work for Sky".


Whilst I was at the Edinburgh Television Festival once, waiting for a lecture from the Minister for Fun, I was chatting to a co-attendee.

During the conversation he told me a rather jolly marketing anecdote.

There are three DIY shops on a high street, all selling hammers. The one on the left, wanting to increase sales puts a big sign up in the window: "ALL HAMMERS 50% OFF".

The shop on the left, not wanting all the custom to go the competitor, ups the ante. "ALL HAMMERS HALF PRICE".

And the shop in the middle, what banner does it put up?

I was remind of that when I read recently the article, Channel 4 and ITV challenge Sky over data it gleans about their shows - Media - guardian.co.uk , and considered the amount Sky charges, and the channels people actually watch. 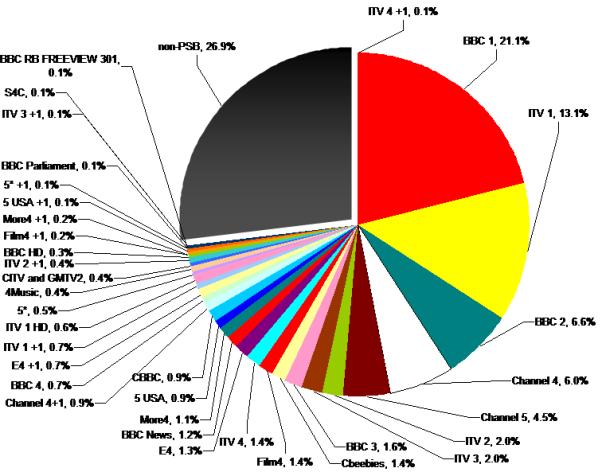 No subscription or other ongoing payment is required to watch these channels. (Figures from BARB, July 2011 Monthly Total Viewing Summary).

However, the next set of channels do cost if you have Sky. The "platform access cost" is £234, and for the full range of non-premium channels, it is £294 a year.

However, the final 5.8% of viewing is of free-to-air channels: 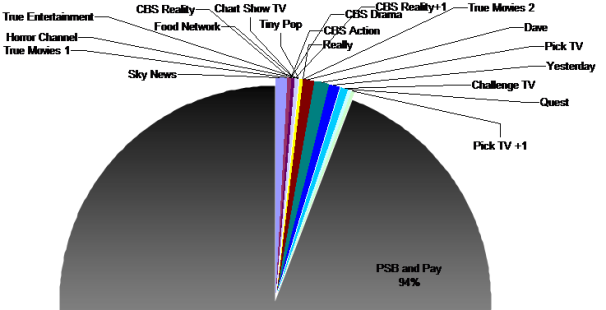 Sky's charges to other broadasters

However, as Mike Dimmick (thanks) points out, after looking at this - BSkyB and SSSL Published Price List - 30 October 2009 this is what Sky charges (yes, CHARGES) the BBC to list their free-to-air programmes in the "Sky Guide":

Then there's a 'Platform Contribution Charge' which seems to be set on viewership. For the BBC:

The BBC is probably paying Sky in the region of £11-12m for EPG services.

In most businesses, it is the business that has to pay for the data it uses. Newspapers don't charge the journlists for their reports. Marketing companies have to pay for address lists. You don't get paid a pound-a-minute for calling 118118. How Sky get away with this outrage is a very good question.

All questions
[][][
In this section
Comments
D
David
sentiment_satisfiedGold
8:37 AM
Sorry but I think Sky are ok you do not like them.
That's your choice, just like people choose the method of recieving their TV.
A question for you method of getting BBC, and the ITV is free of cost?

Then the Sky customers could complain that they are not getting the full EPG; and would not be able to record future programs. They would then be left with only the "subscription" channels as they don't have iPlayer with Sky either.

The Sky customers then could force Sky to pay the BBC to populate their proprietary EPG.

Peter's 18 posts
Bill
sentiment_satisfiedBronze
10:07 AM
Newhaven
Considering the cost cutting the BBC are having to do and with talk of threats to BBC4, the one intelligent channel on TV, I don't see why the BBC should pay Sky millions just to go on their EPG. I think they should pay the BBC for being able to broadcast their programmes, which our licence fees have paid for. Any programme that people start watching in any numbers is bought up by Sky, so then you have the choice of paying Sky or not watching further episodes. True Blood, Mad Men to name just two!

Bill's 47 posts
Les Nicol
sentiment_satisfiedGold
10:56 AM
David - I've no problem in people having choice and if one can afford it at SKY's subscription rates that's OK. What I and I suspect many many others will object to is the money being paid to SKY by the Public Service broadcasters - being legally constrained to do so - ie:- generated from the licence from us all, This effectively meaning that 70% of licence fee payers currently get no return from this where this should be directed into programming and maintaining staffing levels. It's a very different playing field now from that when for many years SKY were a loss making commercial concern it no longer requires effective 'shoring up' with PSB's when there are two alternative platforms in "Freeview" and "Freesat". I am not saying they should necessarily come off SKY's platform but if SKY want them on it and inclusion on their EPG. they should be the one's paying for that. I wonder how their business model would fair were the PSB's legal constraints to be removed and a decision taken to move off and concentrating their Satellite broadcasting without the middle man in their existing direct links with Astra, Eutelsat and the "Freesat" platform.

Les Nicol's 991 posts
T
trevorjharris
sentiment_satisfiedGold
11:37 AM
I believe these figures cover all platforms including Freesat and Freesat from Sky. I am sure if you only included Sky Subscribers the proportion of pay tv would be much higher. Otherwise people would not subscribe.

First of all cheap products always sell in higher quanities than the more expensive. Cheap cars sell in much greater quanities than Aston Martins. So it is not suprizing that the so call free channels are viewed the most.

For me the most watched channel by far is Sky Sports 1. On the BBC I will only watch F1, New Tricks, and Who Do you Think You Are. As far as I am concerned that is very poor value for money especially as F1 is going to Sky next season. The rest of BBC output is either trash or repeats.

Actually for a number of years ITV did refuse to go on the Sky EPG but eventually changed their minds because they were loosing audiences. I don't think there is any law that makes the BBC go on the Sky EPG. If the BBC did refuse they would however face a barrarge of complaints from Sky subscribers who also have to pay the licence fee.

As I understand it Skys EPG charges have to be the same for all broadcasters so the BBC is not paying any more than anyone else.

trevorjharris's 367 posts
Briantist
sentiment_very_satisfiedOwner
11:44 AM
trevorjharris: Why exactly would anyone have to pay SSSL for channels on Fresat (not fSfS), it is a service provided by a joint BBC/ITV venture and is 100% independent of Sky.

I also not that Sky won't pay Freesat for the inclusion of free-to-air Sky News in the Freesat EPG, which given the charges that SSSL make to ITV and the BBC is a damn cheek.

Briantist's 38,844 posts
Briantist
sentiment_very_satisfiedOwner
11:46 AM
David: I don't recall saying I "didn't like Sky", I said I was objecting to this particular business practice, which is that of a monopolising company, and which under normal "market rules" would be deemed illegal.

Liking or not has nothing to do with it whatsoever.

Briantist's 38,844 posts
Briantist
sentiment_very_satisfiedOwner
11:48 AM
Peter: Perhaps if the BBC, ITV, Channel 4 and Channel 5 got together in a room and came to an agreement, the threat to Sky that three-quarters of their EPG usage would not work might get them interested.

Briantist's 38,844 posts
T
trevorjharris
sentiment_satisfiedGold
1:01 PM
Brian I did not mean to imply anyone should pay SSSL on Freesat. Actually Freesat is dependent on Sky for their EPG infrastructure so do have to pay Sky for those services.

Sky news has chosen not to go on the Freesat EPG just as ITV refused to go on the Sky EPG at one time. It's a free world. The situation is different with the BBC though as everone has to pay for the BBC licence. The BBC policy of being on all platforms is proper while the universal fee exists.

The BBC also has to pay Virgin so this is not just a Sky issue.

The only reason for any free to air channel being on the Sky EPG is that there is a profit in doing so. In other words the number of viewers using the EPG justifies the cost.

trevorjharris's 367 posts
Briantist
sentiment_very_satisfiedOwner
1:27 PM
trevorjharris: "Actually Freesat is dependent on Sky for their EPG infrastructure so do have to pay Sky for those services. "

I'm sorry, but that is 100% inaccurate. The Freesat EPG broadcasts are independent from the Sky EPG, it is a totally different service.

For one thing, the Freesat EPG has full radio channel listing!

The delays to Freesat are caused by Sky using "technical difficulties" excuses (as they always do) because they have to "approve" the Freesat EPG datastream when it appears on one of the transponders they manage.

You should not too that the BBC, ITV, Channel 4 and Channel 5 all have to carry the full-Sky now-and-next-and-a-bit EPG on their own transponders at their cost, even though they are handing over millions of quid to Sky.

(The full Sky EPG is on the "default transponder", which is why you can't view TV and see the full EPG on "classic" Sky boxes).

I don't know about Virgin, I don't have any evidence of the situation either way.

"The only reason for any free to air channel being on the Sky EPG is that there is a profit in doing so."

Agreed, and it's for Sky.