Good news for Freeview - seven new frequencies could be providing up to 35 new Freeview HD channels from the main 80 transmitters within a few years.

It appears that the seven UHF channels in the lower "digital dividend review" cleared spectrum for additional Freeview services.

Ofcom could assign C37 to a second public service high definition multiplex, as it can be received by all aerial groups. This could provide BBC three and BBC FOUR in HD, with perhaps ITV 2 HD and ITV 3 HD plus E4 HD, as Ofcom expect to get five HD channels per multiplex by 2013 - Five HD is expected on the BBCB multiplex at the end of 2012.

The remaining channels C31 to C36 will be receivable for group A, group B, group E group K and wideband aerial, and could provide high definition capacity to match all of the existing standard definition Freeview channels. (See also Aerial group performance).

Seven single frequency HD multiplexes would give Freeview HD another 35 high definition channels, making a total of 40 by 2016.

Ofcom has yet to consult on the actual usage and bidding process for these new frequencies.

Arqiva is the company that owns all of the television transmitters in the United Kingdom, as well as two of the six Freeview multiplexes.

Regular contributor Mike Dimmock has pointed out that Arqiva have applied to South Norfolk District Council, to make changes to the Tacolneston transmitter, in which they say

"The decision has now been taken to reallocate spectrum at 600 MHz for additional terrestrial television broadcast services and OFCOM is tasked with the preparatory work leading up to the auction of this spectrum." 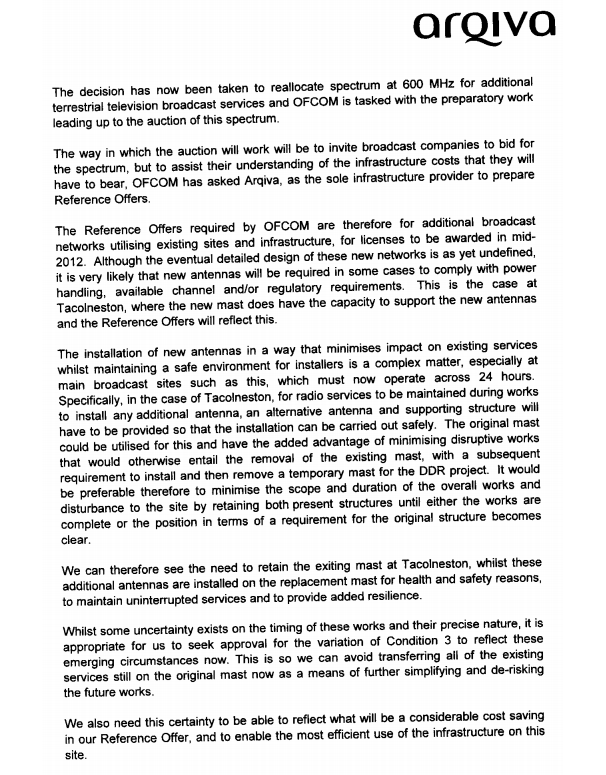 Help with Television sets?
[][][
In this section
Comments
T
Trevor Harris
sentiment_satisfiedGold
4:09 PM
Yep I have seen this document. As I said rather optimistic and as I said thier 2010 prediction failed as they are still transmitting 1440.

Actually I don't understand you saying there is no consumer demand for 3D. The take up at Sky is the same as HD was at the same stage. Sky have just anounced a big expansion of thier 3D service. ITV has test transmisions at the moment. By 2016 I would expect 3D to be common place.

I have recently bought a 3D camcorder and monitor and have been very suprised how good it is. The secret of good 3D is to keep the depth to a natural level.

It is not really possible to drop MPEG2 until all the existing devices out there can do MPEG4. There are about 10 million each of Freeview and Sky.

Briantist's 38,844 posts
Briantist
sentiment_very_satisfiedOwner
4:48 PM
Trevor Harris: There are several problems with 3D, which the consumer electronic industry have yet to address, which was not the case with HD as "HD" production had been going on for years and there was piles of existing content that was in HD (ie, anything on film).

Perhaps one day there will be a way of watching stereoscopic television transmissions without having to wear a silly pair of glasses, until then it is not going to catch on with the vast majority of viewers.

Another problem is that for the 3D to work, the camera-work has to be very static, which means programmes have to be produced as a separate process for 3D. Watching a 2D version of a 3D broadcast is very uninteresting from a viewers point of view, and broadcasters can't really afford to produce in 2D and 3D.


Briantist's 38,844 posts
Martin
5:37 PM
Brian, I was only talking about the new 7 frequencies stated in the report going DVB-T2 for HD. I forgot to say new frequencies in my last comment. Not that we know what channels will be broadcasted and what system will be proposed in the report.

It's a shame as we are the first country to use DVB-T2 that we are not exploiting it and making manufactures only sell the DVB-T2 spec products in the UK. Sky now only sell DVB-S2 spec boxes.

Technology moves quickly and we didn't really think how to design this generation of flat screen tv over the last few years. Products should be designed so you can upgrade them like a PC and of a modular design. The tv's and PVR's are basically computers and they get more intelligent every year, just like Smart TV's we are seeing which have more processing power.

By only changing the tuner(s) in the product swapping in and out the tuner card and not replacing the whole thing. Wouldn't that be a better way to implement things.

I know this is thinking out of the box and really something for the future. But anything is possible.

Martin's 9 posts
Briantist
sentiment_very_satisfiedOwner
6:06 PM
Martin: You can't really make devices "forward compatible" if you have no idea what the future brings.

The Freeview HD service uses MPEG4 for content encoding, which requires a lot of extra computing power and memory and isn't just a simple "software upgrade" as set-top boxes use hardware decoders.

Freeview HD also uses DVB-T2 transmission, which wasn't defined as a standard and once again is implemented in hardware, so you can't just get an existing DVB-T chipset to "do it".

It just isn't worth the bother of having a "modular design", it is much cheaper for the manufacturers to sell you a new box.

Briantist's 38,844 posts
T
Trevor Harris
sentiment_satisfiedGold
8:33 PM
The rapid advance in technology is certainly a problem. Infact I think it would be right to say that when the switch over is complete in 2012 it will be obsolete. We need a faster way of implementing change. I was rather disappointed that mimo was not included in the Freeview HD spec. This requires a new aerial but it would double the capacity of the system.

As for 3D I understand that ITV is planning to show championship football in 3D. It remains to be seen if it will be FTV. There are alot of other events now becoming available in 3D.

I'm probably going to annoy some by saying this but while I find 3D a interesting & clever gimmick but I cannot use it for more than 15 mins without feeling sick or getting a headache, It looks very artificial or "processed" to me & I also don't like having to wear glasses to "enjoy" it. until it has vastly improved, I regard it a bit of a waste of bandwith. I would far rather see more or higher quality HD transmissions which I regard as a far more genuine leap forward in quality & a much better use of precious bandwith (especially on dtt)

I know it's not a simple software implemation. That's because you are taking out the DVB-T hardware and replacing with DVB-T2 tuner hardware. If products were designed this way.

People are replacing and upgrade things every 3 to 5 years, not every 10-15 years when you used to buy a tv. Why not design it with the right hardware and processor to start with.

Processing power isn't really an issue these days. Not when the technology has already been used in Japan using a cell processor which is also used in a PS3 designed in 2006. Toshiba made a television in 2009 that implemented this.

Sony is also gearing up with a new version to do this in it's Bravia range:-
Sony Banking On New Super Fast Cell Processor For PS4 & Bravia TV - Smarthouse

I am talking about tv's in the last couple of years should all have DVB-T2 tuners built in as standard. Also building products that are upgradable and last. In the last 10 years I have upgraded 7 devices in my house.

Just remember how many devices are no longer able to be used after the switchover, i.e old ITV Digital boxes which only came out 13 years ago and many other devices.

Martin's 9 posts
J
Jamie
7:17 AM
May as well make the whole UK Network a SFN.

= more efficently used bandwidth and more choice along with still 1 instead of 6 local UHF numbers that been allocated (remaining will be UK/National).