Ofcom have provided a list of the 65 locations in the UK that can have an "geographical interleaved" frequency - which means a local TV channel on Freeview. 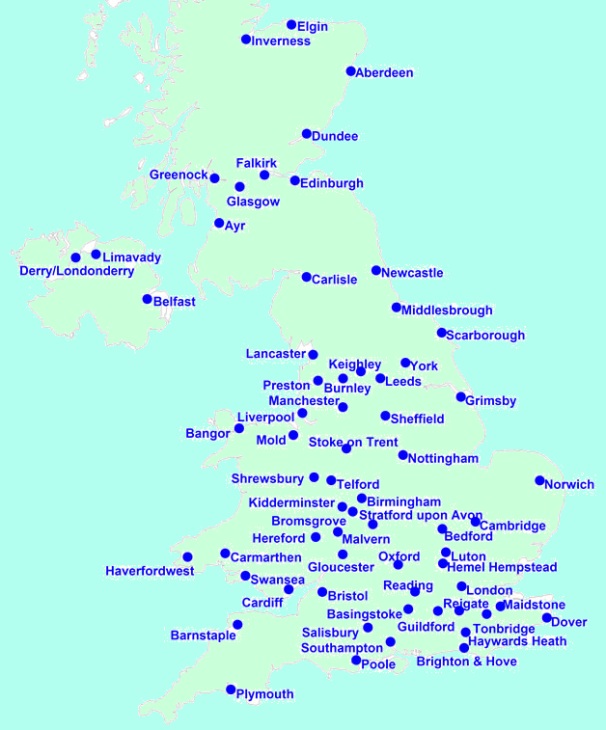 The government wants your views

If you can say, in than two pages, why your town should be chosen to have one of the first local TV on Freeview services, you are asked to answer the following two questions.

Question 1: Why do you think your town or city (if it is shown above) should be among the first of those selected to bid for a local TV licence?

Question 2: We would like to understand what approach potential the multiplex operator for local TV (MuxCo) bidders would take to the locations in this paper in order to make their business models work. Which locations are necessary to ensure a successful MuxCo model?


Help with TV/radio stations?
[][][
In this section
Comments
M
Mike Dimmick
sentiment_very_satisfiedPlatinum
1:58 AM
Ian: It's all about what is achievable from the existing main transmitter network. That leads to some weird locations. Burnley, pop. 73,000, because it's off the existing 6-mux Pendle Forest transmitter; Mold, pop. 9,568, from Moel-Y-Parc, being the only town that could be covered. I can't see a town of < 10,000 people having a viable TV service!

In fact I can't even tell why Pendle Forest was included in the original 81 DTT sites, as it doesn't really cover any major population centre not served by Winter Hill. It was quite powerful pre-DSO, actually no power increase on the first four muxes at DSO; perhaps it filled a hole in the original Winter Hill coverage, before the equalization programme of 2000?

Again, Cambridge and Norwich are proposed locations. The south and east edges of the country are hard to serve anyway with overseas co-ordination required, Ipswich is likely too far from Sudbury and the transmission would head out toward Belgium and the Netherlands rather than being contained.

The mucking about with many DSO steps at Waltham, Sandy Heath and Sudbury indicates what a problem the terrain of eastern England is. It just may not be possible to find a free channel providing enough space for a Derby service off Waltham. Using relays has obviously gone in the 'too expensive' bucket.

At least Pendle Forest is number 52 in terms of homes covered, which justifies the position in the Full Freeview list.


Briantist's 38,844 posts
M
MCMLXII
12:14 PM
Briantist:
As some of these locations are relays with just PSB1, 2 and 3
dose this mean that it will replace a channel
or will it be a new small multiplex?

Also will this start when Channel 5 starts or after digital switch on/over.

The services cannot start until switchover is complete - the interleaves are planned into the full new configuration network, so January 2013 is the earliest date.

Briantist's 38,844 posts
D
darre
4:31 PM
So guessing us in Essex (southend-on-Sea) wont be getting this then, but some of us like myself get our tv pictures from Bluebell Hill in Kent and Sudbury in Suffolk !

Briantist's 38,844 posts
Stuart O.
sentiment_satisfiedSilver
4:24 PM
Wrexham
The thing that hasn't really be talked about and discussed on UK Free TV is the content of local TV programmes.

Will it be just local news or will there be other programmes like local history and geography?
Interviews with local celebrities and important local members of the community?
Any ideas?

And what hours will these local station broadcast from/to?
I doubt they will be 24 hours?
I wonder what they'll show the rest of the time?
Will they just shut down or will they carry Teleshopping like all other channels seem to do when they shut down?

It will be interesting to see which local TV stations I can receive when they start as I get very good signals from Winter Hill, The Wrekin and Sutton Coldfield.
I know these local station will be on a much lower power but you never know how strong or weak the signals come in where I live.

Stuart O.'s 156 posts
Briantist
sentiment_very_satisfiedOwner
4:41 PM
Stuart O.: The consultation expects at least one hour of local news broadcast per day. The licences will go to those with the best ideas.

The capacity will be running for 24 hours a day, I would expect that they will run their local news on a loop in most instances.

I would expect that the use of the frequencies for "home-shopping" would be specifically excluded, but as Ofcom point out the implementation of this system requires an Act of Parliament.