Final switchover for The Wrekin, Ridge Hill groups on 20th April in 2011 week 4

If you are in the west of Central England, you will use the The Wrekin, Ridge Hill, Lark Stoke, Bromsgrove transmitters, or one of the many relay transmitters.


Viewers in Shewsbury, Telford, Bridgenorth, Wolverhampton, Ludlow, Hereford, Ross-on-Wye, Gloucester, Cheltenham and Bromsgrove will have no analogue television from Wednesday 20th April 2011. Unless you use cable or satellite to watch television, if you don't use a Freeview box or set, your screen will be blank.

Most people need only retune their Freeview box or TV, but it would be impossible with 634,600 homes covered by the transmitters, that there would be no problems. 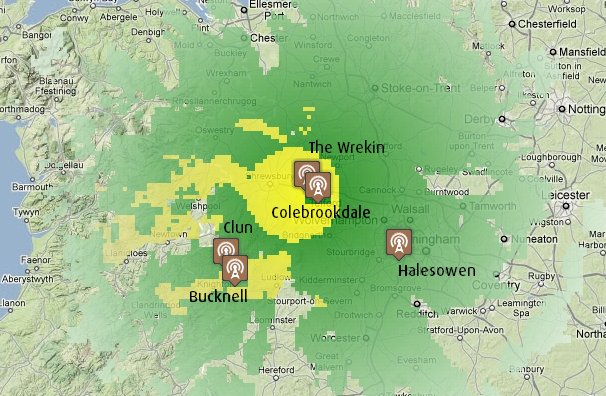 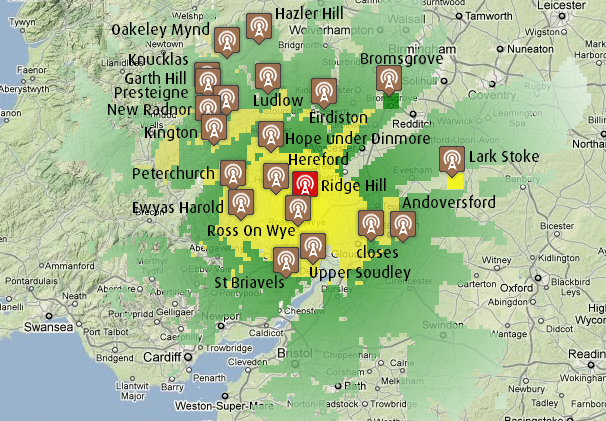 When you now rescan, you MUST do a "first time installation" or "factory reset" scan, not an "add channels". Do the procedure you did on September 30th 2009. If you can't recall what this was, please see generic clear and rescan procedure.

Because the change to 64QAM mode on multiplex D/Arqiva B on Wednesday 20th April 2011, this will mean a small number of viewers will be unable to receive Arqiva B. This is to allow the provision of Sky Sports 1 and Sky Sports 2 to BT Vision customers.

From Wednesday 20th April 2011 there will be a second D3+4 multiplex on C29 to supply the ITV1 (ex HTV) West service, in addition to the ITV1 Central West.

If you had no Freeview service before, you will have the BBC channels digitally from Wednesday 6th April 2011. This is a single multiplex of the BBC channels (radio, television and text) for most people.

Freeview HD will start on Wednesday 20th April 2011 from the The Wrekin, Ridge Hill, Lark Stoke, Bromsgrove and all the relay transmitters. You will need a Freeview HD - DVB-T2 receiver to watch the channels. A HD TV set with Freeview is not enough.

Help with Freeview, aerials?
[][][
In this section
Comments
Briantist
sentiment_very_satisfiedOwner
4:12 PM
wutty: A manual scan does nothing an automatic scan does.

You must have a Freeview HD DVB-T2 receiver to see the HD channels.

Briantist's 38,844 posts
M
Mike Dimmick
sentiment_very_satisfiedPlatinum
4:30 PM
wutty: I'm afraid Digital UK shows no prediction for ArqA and ArqB at your address. It looks like the problem is that the channels clash with the Brierley Hill transmitter, which uses C53 and C57 for analogue services.

It's quite possible that the transmitting aerials don't radiate much, or any, signal for these multiplexes in your direction, at present. The Wrekin has separate low-power aerials pointing west and pointing east (the latter called 'The Wrekin B' in some sources), and before switchover the services used different frequencies on the two. Mux C and D were not listed under the 'east' set.

This will be resolved at the end of September when they move to the main antenna, on their final channels and at final power levels.

The HD transmissions are not compatible with older equipment. 'HD Ready' integrated digital TVs turned out not to be. Look for the 'Freeview HD' logo.

I think the promise was that the TVs would work with whatever standard was chosen - and afaik they do?

Steve's 1,173 posts
M
Mike Dimmick
sentiment_very_satisfiedPlatinum
5:47 PM
Steve: It depends what sort of standard you're talking about. HD Ready means the TV can handle 720- and 1080-line inputs from external boxes, using analogue component and digital DVI or HDMI, and supports 'content protection' on the digital input(s) using HDCP. That's it. The HD Ready TV 'works with the standard' by having an external box that decodes the signal.

Mike Dimmick's 2,486 posts
S
Steve
sentiment_satisfiedGold
5:56 PM
Wrexham
I agree that your overage man in Currys probably thought HD Ready meant "Ready to receive HD TV". But we well informed types knew that was not possible until they agreed a standard!

I am deferring buying a new TV until they all have HD Tuners and Wifi inputs for BBCi.

Do you know if such things yet exist?

Steve's 1,173 posts
W
wutty
11:15 PM
OK, I understand the (bad) news on Sky sports, but the HD issue is a problem! I have now looked at the prog guide on my Bravia full HD TV, and the HD channels are there (and work!) so it seems that the BT Vision is old and not up to the mark! A call to BT in the morning is called for - Thanks!

Briantist's 38,844 posts
P
Paul Durham
11:40 AM
Hi, have just gone through the switchover and recieve signals from the Wrekin. Re tune done, even repositioned the aerial and I am getting good signals on all channels except ITV 4. Checking the signal strength it's showing 70% and 100% on quality but all I'm getting on screen is a message saying "programme unavailable - please change channel".
Can anyone explain or help cos I'm now missing the IPL cricket which is annoying. Cheers