In comparison with most other countries in the world, the UK had always had a poor local TV service. 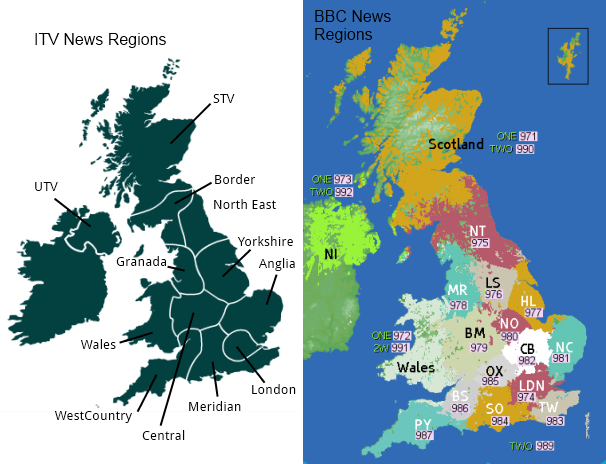 The BBC did trail a "county based" local TV news service in Warwickshire, Herefordshire, Worcestershire, the West Midlands, Staffordshire and Shropshire, but it was of very poor quality and the BBC Trust afterwards placed a ban on the BBC providing any further breakdown of the traditional BBC One regional news service.

ITV also tried a service, ITV Local, in 2005 which used broadband to provide news, weather and other services for two schemes first in Brighton and Hastings. However, the service was closed in March 2009 due to the state of ITV plc finances.

It is proposed that:


Help with TV/radio stations?
[][][
In this section
Comments
N
Neil Rees
5:14 PM
Wisbech
My friend lived near Oxford and watched local TV, as part of a local TV franchise, on a channel called Six Oxford, but I understand this service ceased around or before April 2009.

I think Germany may be another from my experience watching German TV channels... pop along to www.ard.de.

Terry's 18 posts
A
ANDY
12:33 AM
hi i live in west yorkshire reading all the details of local tv starting in next 12 months with the changes of the freeview numbers [ what the hell ] are freeview up to dont get me wrong the change are fine as long as there going to be MORE AND MORE FREE NON PAY BASE CHANNELS ON THE FREEVIEW SERVICES WHY SHOULD ANYBODY PAY FOR EXTRA CHANNELS THESE DAYS LETS FREEVIEW BE A FREE MARKET PLACE FOR FREE PAY TV CHANNELS LIKE GOLD DISCOVERY CHANNELS ETC B SKY B SHOULD HAVE LOST LICINESS TO BROADCAST THIS AND AS FOR PAYING FOR TV LICINESS SHOULD GO THEY PAY NOT A PENNY OVER IN AUSTRAILA AND FREEVIEW IS A AUSTRAILA COMPANY WITH SUB COMPANYS IN UK AND EUROPE SO COME ON

ANDY's 1 post
K
KMJ,Derby
sentiment_satisfiedGold
11:21 AM
ANDY: Discovery, Gold etc choose to be pay channels as they receive more income from subscriptions than they would from only showing advertisements. As Sky already has a subscription collecting service in place it makes economic sense to be part of the Sky bouquet rather than each channel collecting individual payments. It is interesting to note that the proposed local channels are being funded in part by the TV licence, in addition to funding from commercials. Not only are the initial start up costs being subsidised, but it appears that the BBC is expected to take up some of the programmes made by these TV stations. The reality is that advertising revenue is now split too thinly between the various media, with the result that the original set up for public service based Independent local radio is now history in most areas; regarding commercial television only ITV can afford (just) to make new drama productions. Note too that the HD services of ITV2/3/4 are pay channels, in much the same way as the HD services are in Germany.

KMJ,Derby's 1,811 posts
N
nicholas mugford
sentiment_satisfiedSilver
11:53 AM
Hi,in respect of uk local tv stations,i don't think the uk audience was really interested,as long as the
network services were available,it possibly the mindset as local stations weren't there at the start,so unlike
radio,little interest.

nicholas mugford's 120 posts
R
Richard Cooper
sentiment_satisfiedGold
3:29 PM
nicholas Mugford: Hi, Nicholas. I think you do have a point here, although in the East of England tv viewers have always liked regional tv news magazine programmes, such as the BBC's Look East and itv's itv Anglia News and its predecessors. When Mustard TV launched in March 2014, I was one of a very significant minority of Norwich city tv viewers who expressed any interest in it. Two years on and the station seems to have developed a little more interest amongst those who live in the Norwich suburbs, with its local property programme developing in popularity recently. It has also been interesting for me to note how many Swansea tv viewers who don't get their signals from Kilvey Hill have posted on UKFREE.TV their dismay at not being able to receive Bay TV Swansea since its launch on 12th. July 2016. I'm not sure what you are saying about local radio because when radio broadcasting began in England in 1922, 2LO was a 'local station for London'. Richard in Norwich.