I have been updating things (as you may know) to have better mapping on UK Free TV, and this brings new look transmitter coverage maps.

These style maps will be introduced in the next week.

They show much better detail, as shown in this example. You will also be able to zoom in and out of the maps to see more clearly.

You can see this example, more soon... 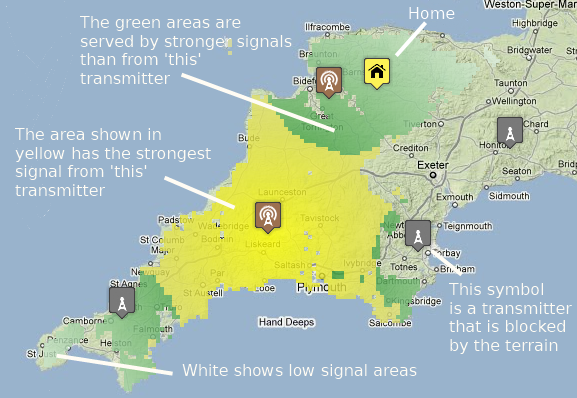 You will also be able to view the overlay maps with satellite, road or combination maps.

Also, you will be able to get a "terrain" view of the path between 'home' and a transmitter: 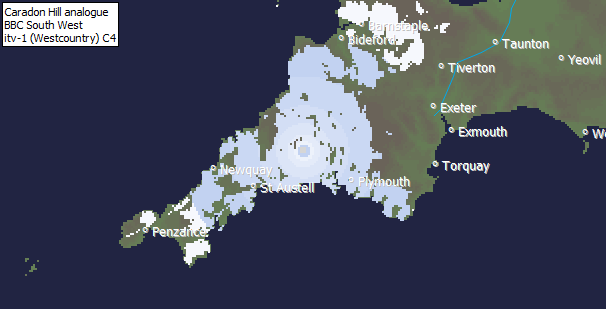 Briantist's 38,844 posts
B
B Pye
10:46 AM
Please Help! I retuned all of my 3 TV's today in line with switchover deadline 8/2/12 for Berkshire (Wokingham), but have lost BBC1/2 channels on all sets. Where do you think the problem lies and what might be the solution? Many thanks B Pye

B Pye's 1 post
Briantist
sentiment_very_satisfiedOwner
11:12 AM
B Pye: Can't be sure without a full postcode, but please try My Freeview box has no EPG, is blank on FIVE, ITV3, ITV4, ITV2+1, has no sound or the channel line up is wrong | ukfree.tv - independent free digital TV advice - also see Freeview signals: too much of a good thing is bad for you | ukfree.tv - independent free digital TV advice .