Whilst developing the new reception prediction system, I went looking for the reference material relating to the UK Aerial Groups system.

To assess the loss of coverage as a result of moving outside of the receive aerial group, account needs to be taken of the performance of receive aerials.

For planning purposes the UKPM assumes that the gain of a receive aerial system is 7dB. This is a somewhat idealised figure based on a good aerial and feeder and no pre-amplifier. The performance of actual receive installations is known to vary considerably from this ideal. Two studies, one for the Virgin consortium that bid for the Channel 5 licence in 1995 and the other for the ITC in 2004 investigated the actual received level for a large sample of domestic installations. This study considered aerial group but not the performance of actual receive installations.

In addition to variability in receive aerial system gain, most aerials are banded and their performance falls away outside their design operating band. The ITC as part of the documentation for the original DTT plan, Notes for applicants on coverage of Digital Television, October 1996, listed the out of group response of representative receive aerials.

I have reproduced the information from the table as a graph. The values are the attenuation (in dB): 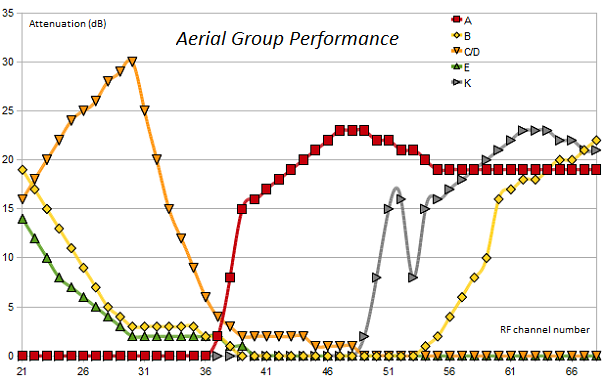 Although being unaware of the type of aerial you have in mind, I would not hesitate in using an aerial of the Log periodic variety such as seen in the undermentioned link, the Log36 having an element of built in protection against 4G transmissions, that is should you reside in an area where the possibility of interference from same exists.


jb38's 7,179 posts
R
Richard Cooper
sentiment_satisfiedGold
7:57 AM
jb38: Hi, jb38. Aerials that used to be classified as 'wideband' or group 'W' have recently been re-classified as 'total band' or group 'T' since the bandwidth used for tv transmissions was reduced from channels 21 to 68 to channels 21 to 60 since channels above 60 were sold off to 4G. Just so you are aware when accurately advising other tv viewers who post on this site. Richard, Norwich.

Despite that, the performance of many so-called total band aerials, especially those of the modified Yagi pattern, is significantly reduced towards the lower frequencies, meaning less sensitivity at that end of the spectrum of interest. Thus many of us suggest looking at the log-periodic pattern which does not suffer this problem to the same extent.

MikeP's 3,056 posts
R
Richard Cooper
sentiment_satisfiedGold
7:41 AM
MikeP: Thank you for that, Mike. I note that log periodic aerials are popular at those transmitter sites which receive signals from another transmitter and then re-transmit to a smaller area, and so it may well be probable that a greater number of domestic consumers will consider their use for their tv reception in the future. Richard, Norwich.

Richard Cooper's 462 posts
J
jb38
sentiment_very_satisfiedPlatinum
8:14 AM
Richard Cooper : As an engineer of many years standing I am already perfectly aware of the situation with regards to the re-classification of wideband aerials and for the reasons mentioned. However, that said in my reply to Moss applies irrespective of what type (W or T) he had in mind, as his posting (to me anyway) suggested it being one more of seeking confirmation to what had already been decided upon, hence no need to go into explanations re identification letters.

Moss's 3 posts
J
jb38
sentiment_very_satisfiedPlatinum
8:53 AM
Moss : Basically yes, although knowledge of your location would have been of assistance, as this would have enabled a check to be made on the signal levels etc expected at said location.

By the way, there's two versions of this aerial, the original UNIX 32 covering channels 21 - 68, whereas the UNIX 32T is the newer version designed with an element of protection against 4G transmissions, i.e: covering channels 21 - 60, although should you reside in an area with the potential to be affected by 4G transmissions? the standard UNIX used in conjunction with a 4G filter gives superior results over that of the later 32T version.

Moss's 3 posts
J
jb38
sentiment_very_satisfiedPlatinum
11:35 PM
Moss : No problem Moss, pleased to have been of assistance.

However, as far as your UNIX 32 aerial is concerned, this should be perfectly OK for use in the Skegness area, as one or two test codes indicated that the area has a clear line of sight with Belmont's mast, although if you do experience any problems, then a post code or one from somewhere nearby will be required, e.g: a shop incl Post office.

jb38's 7,179 posts
M
Moss
6:24 AM
Thanks JB. One more question. As the UNIX 32 is quite an expensive aerial, is there a like for like cheaper alternative which is just as good ? Some say that the most expensive is not always the best.
Regards.
Moss