What is behind the 30 September Freeview retune?

Why exactly do you need to retune your Freeview box on 30 September 2009?


"All Freeview boxes, Freeview+ digital TV recorders and digital TVs will need to be retuned for viewers to carry on receiving all of the services available to them, including Five, ITV4 and BBC Radio stations. Without a retune on or after Wednesday 30 September, viewers will not be able to access these channels."

If you are wondering how to retune your Freeview box, please see how to do a Freeview retune.

There is a gap in this year's switchover scheudle. The Carmel group of transmitters finishes on 23 September 2009, with the next at Llanddona starting on 18 November 2009.

This leaves time to sort out the multiplex configurations before the introduction of the Freeview HD service on 2 November 2009.

Things are going to get a little bit complicated, as a game of musical chairs has to happen. Here's a diagram to help your understanding. 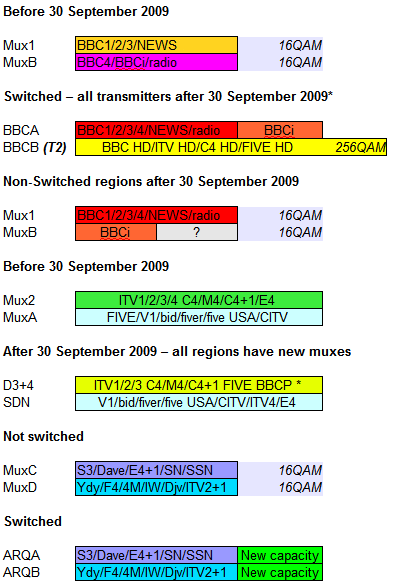 First, the BBC needs to move all of the services it operates from multiplex B, because after November 2009 the post-switchover version (PSB3 or BBCB) will be operating in DVB-T2 mode and will be invisible to standard Freeview boxes.

This will look to most people like BBC FOUR/CBeebies moving from Mux B to Mux 1.

The BBCi services will then form a block of 8Mb/s that will comprise the final third of multiplex PSB1/BBCA, or will be carried as multiplex B before switchover.

The public service channel FIVE will move to Multiplex 2 as part of the bandwidth swap that allowed BBCB to be used for Freeview HD. This deal also puts BBC Parliament on Multiplex 2. In Wales S4C and S4C2 will also need to be carried on D3+4 multiplex.

ITV will be moving ITV4 to Multiplex A (a swap with FIVE) that will restrict this channel to the full Freeview service transmitters.


Help with Television sets?
[][][
In this section
Comments
J
Jane Smith
2:02 PM
I had an aerial man round at the weekend who added new tv points into my kitchen and spare bedroom, he said he put a amplifier in the loft but am thinking all that happen was the signal was split as i am struggling to now watch tv in the bedroom, I have had to re-tune my tv and now itv and a few other channels keep skipping and having a quick scretting noise.

Also i recently lost channel 1tv2 +1 about 2 weeks ago before the aerial man came.

Jane Smith's 1 post
Briantist
sentiment_very_satisfiedOwner
2:23 PM
Jane Smith: This can happen if you fit a amplifier - they often cause the digital signals to be disrupted.

Can you access the loft to see if there is an amplifier?

Briantist's 38,844 posts
J
johnRobinson
12:06 PM
Bewdley
Simple Question
Will the Wrekin signal strength increase on Sept 28 2011 ? Most of my channels are breaking up at the moment, They were ok a while back.
JohnRobinson

johnRobinson's 1 post
Briantist
sentiment_very_satisfiedOwner
9:03 PM
johnRobinson: Yes, it did... However, you should be using the Bromsgrove transmitter.

Briantist's 38,844 posts
M
montymonts
12:10 PM
Newmarket
Recently I have started receiving a "No Signal" or "Poor signal quality" messages for ITV1/3 and Ch4/5 also for bbc radio 2.
Any advice.?

Briantist's 38,844 posts
J
john powell
12:54 PM
Ipswich
where has 5* and 5+ gone we like to record on them if we are late getting home in time,
of course we know that we can loose any channel at anytime
regards