Everything you ever wanted to know about Freesat but were too afraid to ask...

Freesat is a joint venture between the BBC and ITV plc to provide a consumer-orientated free-to-air satellite reception service. Freesat does not provide any television or radio channels itself; instead it markets the channels and receiver equipment and co-ordinates the provision on an electronic programme guide.

Is Freesat linked to Freeview?

One of the conditions of the BBC Trust approving Freesat was that there must be no linkage between Freeview (which markets digital television though and rooftop aerial) and Freesat. BBC Trust - "Freesat" closed consultation

Is this a new service?

Only partially. When direct-to-home satellite services launched in Europe, they were all free. Over time some of these services became subscription, enforced by encryption systems that rendered the signals unwatchable without an appropriate decoder box and subscription card.

When, in 1998, the digital satellite services started, many of the formally free to air channels became subscription services. This originally included those from the BBC and ITV, who mistakenly believed they had to encrypt. However, many channels realised that they did not need to pay Sky Subscriber Services Ltd (SSSL) to simply appear on the Sky Digital Electronic Programme Guide (EPG).

The Office of Fair Trading ( OFT), part of the British Government has always required Sky to provide a free-to-air alternative, and this is known as Freesat From Sky ( fSfS). The OFT understood that SSSL was positioning itself as a gatekeeper to the whole of digital satellite television, and fSfS was required as a market intervention because Sky dominates the pay television market.

Sky has blown hot and cold over fSfS since 1999. At some points it has been happy to market the scheme, at others it has almost hidden it away. Today, the majority of those using fSfS (around a million homes) do so because they have let their Sky subscriptions lapse. When the BBC withdrew from using SSSL encoding during 200X, Sky took the opportunity to cancel all the fSfS cards, and provided messages to the users that erroneously informed them that they had to subscribe once more to continue with their satellite television.

The idea of a BBC Freesat service has been floated for many years. It has always been known that there are going to be a proportion of homes in the UK where terrestrial digital reception will be over-expensive or have limited reception, even after digital switch-over is complete. In addition there are some people who do not wish to have a service, even a free one provided by a News Corporation company, often because of antipathy towards the American owner, Rupert Murdoch.

Since 1998, all UK direct-to-home satellite television broadcasts have used satellites in the 28.2 degrees East orbital position the satellites are in geostationary orbit (they appear stationary from the ground) above the equator 35,786 km over Democratic Republic of Congo (shown on the map below).

There are now five satellites: four belong to SES Astra, a Luxembourg company; the other belongs to the HotBird consortium. Each satellite has a number of different transmitters (known as transponders) which these companies hire out on long-term contracts. Four of the satellites can easily be viewed from most of Northern Europe with a small (60cm) satellite dish, the other has a reception area (called a footprint) focused on the British Isles.

The transponders are listed here. You can see that many have been restricted to Sky subscribers, but many are free-to-air. 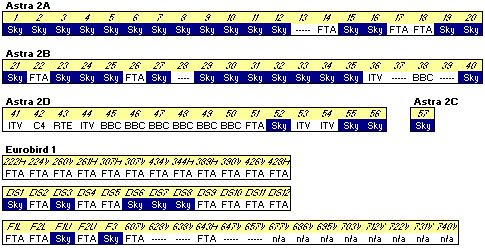 What channels are on Freesat?

NOT expected but not yet confirmed channels

To see the whole list: All free-to-watch channels - ukfree.tv

Where can I receive it?

Freesat is intended for UK reception, however the signals do cover a larger area, due to the nature of satellite transmission. Please click on the 'footprint' maps for more details. 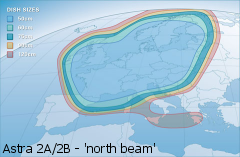 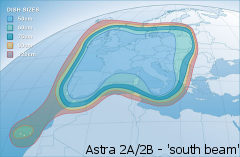 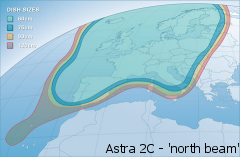 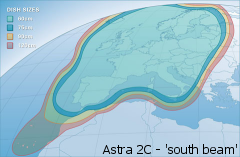 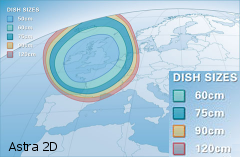 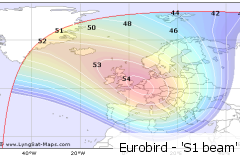 How much will it cost?

Argos - www.argos.co.uk is already listing a number of boxes, such as those shown below.
The installation charge (including dish) is listed as 80 - and their 'installers will call within 48 hours to arrange a convenient date for set up and installation of your Freesat equipment and satellite dish.' - also they say to 'refer to leaflet inside Freesat digital box for more information', see Buy Single Freesat Installation. at Argos.co.uk

Argos are currently showing a 50 and 70 SD box, and a 120 and 150 HD box. All models have 'LAN port for connection to broadband, for faster return path when accessing Freesat digital interactive services.'

Other stores are available.

Do I need a card or to plug the box into a telephone line?

No, and no. But you CAN connect some boxes to your internet router to access additional material online. Access to the BBC iPlayer will start shortly on Freesat..

Will the picture quality be better than Freeview?

Yes, if you have a HD box and connect it to your television using a HDMI connector. See HD and Freesat questions and answers - ukfree.tv for more information.

What about the Interactive channels and text service?

The text services on Freesat are in high definition, and are more modern than found on other systems.

Will I be able to use a Personal Video Recorder?

Of course, and you will not have to pay a monthly subscription, as is the case with Sky+. They will be in the shops very soon.

How does it connect to my television

A HDMI lead is used to connect your HD box to the HDTV. And note, please do not be fooled into buying an over-priced one, it is a digital connection and will work, or not.

A SCART cable is used for SD reception and for connection to 'leagacy' equipment such as a DVD burner.

For more information see: Connecting it all up - ukfree.tv

Yes, but you need a quad- LNB. For more information see: Freesat reception - all about dishes - ukfree.tv

Will there be an electronic programme guide (EPG)

The Freesat EPG is independent from the one provided by Sky and includes listings for the radio stations, as with Freeview.

What about subtitles and audio description

Subtitles: yes. Audio description: ensure you have a compatible box.

Can I just plug a Freeview box into a dish?

No. They are incompatible - do not attempt it, you risk damaging the equipment or getting an electric shock.

Anything missing? Let us know, below...

Help with Free satellite?
[][][
In this section
Comments
B
bernard
1:11 PM
Hello,

Can you please tell me if I will be able to receive the T.V channel challenge 125 if I get a Humax digital box

125 is Challenge. You'll need a Sky box and subscription to see it.

Gordon Reed's 1 post
Briantist
sentiment_very_satisfiedOwner
5:40 PM
Gordon Reed: Sky Sports news is now part of the Sky Sports package on Sky, you can can only get it via them or via Virgin Media.

terry's 1 post
P
Philip
3:13 PM
To use a freesat recorder do I need two cables from my dish if i want to record one channel whilst watching another

Briantist's 38,844 posts
P
Pete
12:03 PM
I currently have Sky multiroom with a Sky+ box in one room and a standard Sky box in the other. I am about to cancel my Sky subscription (will keep boxes as I've been with them a few years). Two questions;
1. Will I automatically start getting FSFS on both boxes without paying anything?
2. Will I still be able to record things using the Sky + box (if so can I still record one thing while watching another)?