Freesat reception - all about dishes

Satellite reception has both advantages and disadvantages compared with terrestrial (aerial) reception.


Satellite reception has both advantages and disadvantages compare with terrestrial (aerial) reception.

By using much higher frequencies (gigahertz, compared to terrestrial televisions megahertz) more transmission channels called transponders (the satellite equivalent of multiplexes) can be provided. For example, there are only six Freeview multiplexes, but Sky or Freesat users can access two hundred satellite transponders.

Aside from exceptional weather conditions (very heavy rain for example) digital satellite provides stable pictures and audio. Where Freeview transmitters are no more than 732 metres above sea level, the geostationary satellites used for television are 35,800,000 metres above the equator so reception is possible even where buildings, trees and hills make terrestrial reception impossible.

The downside of the transmitters being 22,300 miles up in the air is that the signals are very, very weak - so standard TV aerial is of little use. When the signals are sent to the satellites, huge dish transmitters are used to uplink the signal to the satellite. These are tens of metres from side to side, and feature an emitter that generates the signal, which is first bounced of a mirror (called a reflector) and then off the surface of the parabolic dish. 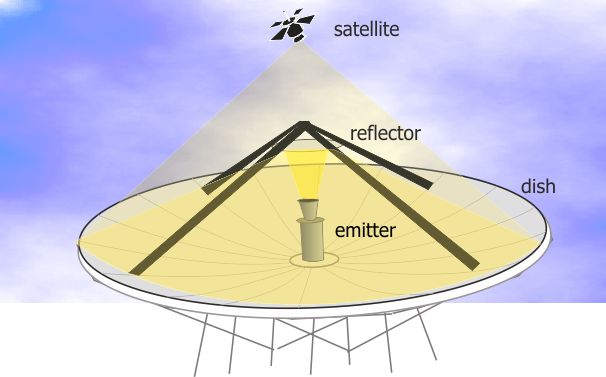 There are many satellites in the sky over the equator. Often these are in clusters over a particular position, for example there are four used for UK television are at 28.2 degrees east. There is another cluster over the 19.2 degrees east positions that are used for German television.

To receive these very weak signals from the satellite, it is necessary to use a dish for reception too. By using a reflective dish, this concentrates the signals onto a small device called a LNB. This is held in front of the dish by a metal arm. 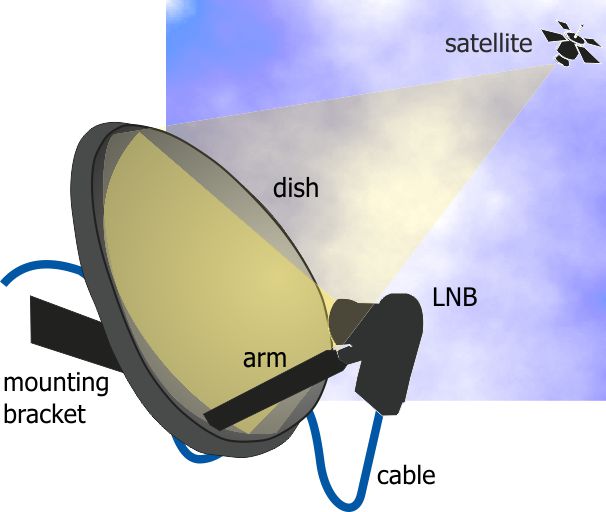 The size of dish for reception is typically much smaller; often 60cm to 100cm in diameter, but the exact size depends upon the transmitting satellite transponder. To keep the transmission power levels down to levels that can be powered by the satellite's solar panels, each beam is focused on a particular area of the Earth's surface. If you are trying to receive the signal at the centre of this zone, a small dish is required. At the outer edges, you may need a 5 metre dish. Maps of these zones are provided by the satellite companies, and are called satellite footprints.

When the dish is installed it must be aligned carefully as the signal is very weak. The installer needs to know the inclination and the azimuth from the ground location to the satellite. If you install yourself you will find that there are markings on the dish that are used to point the dish in the correct position. It is important that the view of the satellite will not be blocked, so must take into account leaves growing on trees and potential building works.

For many people the LNB will have a single cable connected to it, however if you have Sky+ or a multi-room installation the LNB package will actually contain four receivers a quad-LNB. Unlike terrestrial television where you can split the aerial cable to feed more than one Freeview box or television set, with satelite reception you cannot. So, a Sky+ box with two receivers (so you can watch one thing and record another) has two cables connecting the box to the dish.

The cable that connects the dish to the receiver must be satellite grade cable. Whilst this looks superficially like the cable used to connect and aerial to a television, a higher grade cable is required for satellite reception.

Here is an image of a co-axial cable. This sort of cable is used to connect any type of receiving aerial to the reception equipment.

RG6, PF100 and PH100 are all types of coax cable that are suitable for the very weak signals that are received by a satellite dish. (The power is the same as you would receive from a one-bar electric heater on the moon).

The conductor in the centre passes the signals received from the dish to the set-top box. This is made from steel in RG6 cable, and from copper in the RF100 and PH100 types. This makes RG6 less suitable in the UK where rain can damage the cable.

The shielding is responsible for keeping unwanted external interference from damaging the signal. In the cheaper cable this will be a foil wrap, in better specified cables this is a braid (or mesh) of copper wires. The sheild in the RF100 covers 58% of the cable.

The non-conducting layer between the shield and the conductor is called the dielectric. This can be either a solid (RG6), foam (RF100) or air-spaced (PH100) dielectric. This makes the cables progressively more flexible (ie bendy without damage).


Help with Free satellite?
[][][
In this section
Comments
M
Moray Christie
8:22 PM
Hi can you help me I live in a caravan with a sat dish,all works well,but I dont get channel 5.can you help please.
Moray

Moray Christie's 2 posts
K
Keith Thacker
6:36 PM
In January, Les Nichol and jb38 kindly helped me to get my Humax Foxsat-HDR into service. It has worked very well until yesterday. It now shows a green screen on every channel.
When I switch on the Humax, I select the appropriate TV channel and the Boot message appears, as normal, on the Humax display. The Humax screen appears on the TV, as normal, and the last-viewed channel appears on the screen, with sound, for about 8-10 seconds. Then the screen goes bright green and the sound continues (for about 10 seconds). I can change channels with the remote, they appear in the HDR display, I can hear the audio (for 10 seconds) but the screen remains green. If I select menu or guide or media, they appear in the Humax display but the screen remains green. I have re-booted endless times with the same result. The TV (a Sony Bravia) is working perfectly and I can play DVDs with no problem. I have checked and re-checked all the internal connections and they are fine. My satellite dish has not been disturbed in any way and all the external connections are fine. My system shows that I am using Ver. U7.52.
Humax have suggested using the V-Format Button on the remote to switch between the different resolutions on the Humax box or, if this didn't work, fully booting the Humax before switching on the TV. Neither solution has worked.
Can you please offer some advice. Also, do you know what causes the green screen?
Regards, Keith

Keith Thacker's 15 posts
J
Jim F.
sentiment_satisfiedSilver
7:26 PM
Keith,
I've seen the "green screen" effect before with dodgy HDMI connections. You don't say if you're using an HDMI lead (but with an HDR box I guess you are). Could be a dodgy HDMI lead (or possibly something amiss with the HDMI sockets either end).
It would be worth removing the HDMI lead and seeing if works via a SCART lead - after that you'll need to experiment with different HDMI leads, and have a close look at the sockets on the Humax and the TV.

Jim F.'s 141 posts
Les Nicol
sentiment_satisfiedGold
8:36 PM
Keith - The Green screen is a failure in the HDMI Handshake process between the HDR or other linked HDNI connected device. It can be triggered by changing the V format - so if you use 720p push it until it's 720p again and it will force the receiver to check that your TV complies with the HDMI connection. I experienced something similer when I connected my Hyundi Mini media centre with a "Technisat" receiver and linked to the second HDMI on the TV and booting the Hyundi first. By booting it last this corrected the handshaking process and resolved the Green Screen issue.

Briantist's 38,844 posts
K
Keith Thacker
7:07 PM
Many thanks to Briantist, Les and Jim F for offering, as always, solid expert advice. I checked all the sockets on the TV and Humax (they look fine - no obvious damage or distortion) and tried a different HDMI cable, rebooted the Humax but again got the green screen within 10 seconds. I also again tried the "forcing" suggestion using the Humax V-Format button but could not persuade the Humax and TV to talk to each other. I then tried using a SCART lead as suggested by Jim F and it works! All of which suggests that it is an HDMI problem. Could you guys please explain what, if anything, I am losing by using a SCART connection instead of HDMI and would Briantist kindly explain what he means by a "failure of the copy protection system". Is that now thought likely and, if so, would I have to send the unit back to Humax? Sincere thanks, again. Keith

Not all display devices support HDCP - almost all do but some very old HD equipment doesn't.

The best thing to do is to plug the TV into something else that provides an HDMI output (a PC, a DVD player etc) and confirm that the HDMI input is OK.

It *could* be a fault with the Humax - can you plug it into another HD display using an HDMI cable to confirm?

Dave Dearman's 1 post
Briantist
sentiment_very_satisfiedOwner
5:00 PM
Dave Dearman: Unless you go to the north of Scotland, a "normal" size dish should provide reception.

Briantist's 38,844 posts
S
simon
4:25 PM
hi all
just bought my self a freesat humax box HD.
i have up an old sky digital dish up and must be one of the early one and not been used for must be 4/5 years .
will the lnb work ok with the new humax HD box or will i have to get a new one for freesat HD ?
thanks
simon